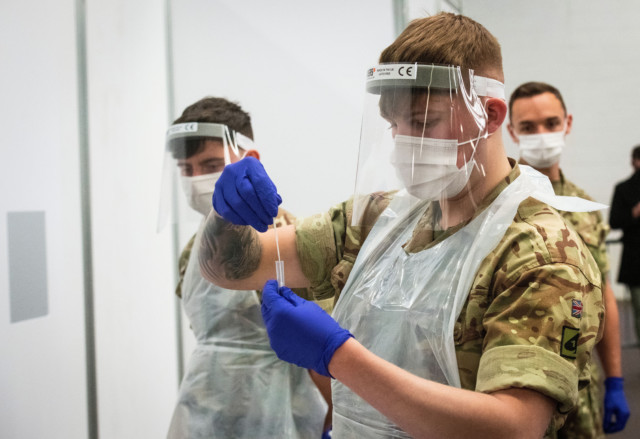 HUNDREDS of thousands of quick-result covid Covid tests will be rolled out this week to people even if they have no symptoms, the Government has announced.

Local public health leaders in dozens of areas will be sent thousands of tests to try and stop the spread of the virus and identify it in people who are’t showing signs. Local teams will be able to deliver community testing based on their expert knowledge, and can use them how they see fit.

The new tests will give people results in as little as 15 minutes.

Mr Hancock confirmed the news in the House of Commons today, saying he had been in touch with 67 authorities – giving them the capacity to test 10 per cent of their population.

He said today: “I am delighted to say 10,000 of these tests will now be sent out by NHS Test and Trace to over 50 directors of public health as part of our asymptomatic testing strategy.

“I want to thank all directors of public health for their support and efforts over the past months to help us tackle this virus, bring it under control and get the country back to what we love doing.”

Around 600,000 tests will be sent out to people across the country over the next few days to try and pick up more asymptomatic cases to try and test 10 per cent of the population.

The first round of swabs will be followed up with weekly packages of more tests.

And NHS staff will be tested twice a week to try and protect patients and employees, Mr Hancock said.

“(Rapid) tests allow us, from today, to begin rolling out twice-weekly testing for all NHS staff, which will help keep people safe when they go into hospital, and help keep my wonderful colleagues in the NHS safe too,” the Health Secretary told the Commons.

Announcing the new rapid tests, Boris Johnson said last night: “We are now going further by sending out hundreds of thousands of rapid lateral flow tests to local authorities right across England – and also of course to the Devolved Administrations.”

And he vowed to work with universities “to establish, as soon as possible, similar mass testing capacity for students up and down the country.”

Scientists say mass testing could halve the R-rate, the number of people each Covid victim goes on to infect.

The army have been drafted in to go door-to-door with tests and set up special centres in Liverpool to get them out to as many people as possible. EastEnders fans scared to sleep after Leos creepy eye spied on Whitney from the...