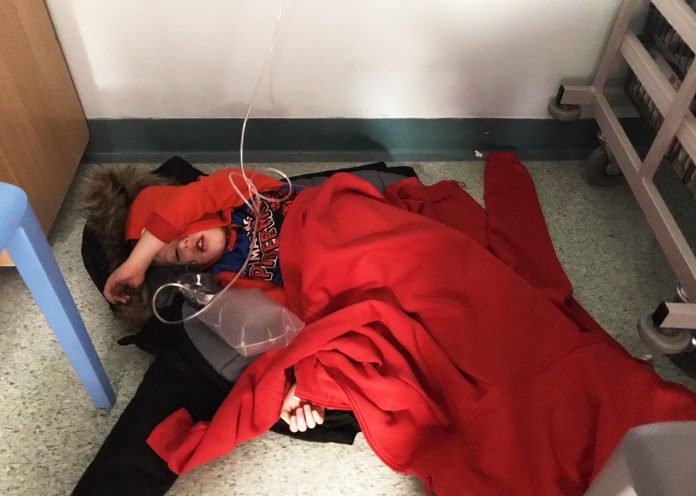 LABOUR has been accused of playing politics over the plight of a boy asleep on a hospital floor.

The mum of Jack Willment-Barr, four, has complained to the Press regulator.

The Daily Mirror splashed his photo on their front page and an ITV reporter tried to goad Boris Johnson into commenting.

Jeremy Corbyn shared the picture on Twitter, blaming Tories for the lads ordeal, which was due to a lack of beds at Leeds General Infirmary.

But social media called his remarks repugnant. Mr Johnson stressed he wanted to push through Brexit so he could deal with issues, such as the NHS.

But he was later pressured into a reaction, saying: Its a terrible, terrible photo. I think patients have a much better experience than this poor kid has had.

Health Secretary Matt Hancock was met by left-wingers at the Leeds hospital.

It was initially claimed Mr Hancocks aide Jamie Njoku-Goodwin was punched in the face after shielding his boss from the protesters.

But footage later revealed the blow to be accidental from a protesters arm. The Tories say Labour WhatsApp groups are urging flying picket-style activists.

One text told supporters to head for Leeds hospital saying: We need people to get down there and kick off.

Mr Johnsons walkabout in Barnard Castle, Co Durham, had to be scrapped after 100 activists turned up.

The PM said: I have noticed Labour activists have been turning up in intimidating ways to heckle.

I dont find this consistent with Mr Corbyns claim to want to take the acrimony and heat out of politics.

Coronation Street horror as Yasmeen is charged with attempted murder – despite the police...

Why isn’t Emmerdale on ITV tonight?

Five tips to stage dress your home to try to secure a quick sale...

Liz Truss could give EU judges oversight in Northern Ireland FOREVER to get Brussels...