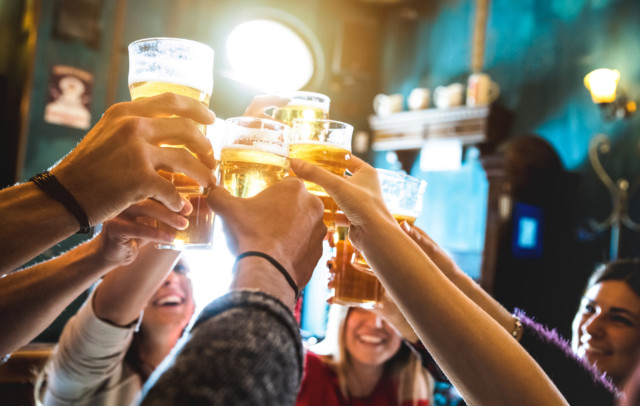 DRINKERS must leave the pub after their meal and won’t be allowed to order another round of beers after dinner, No10 has confirmed this afternoon.

32 million Brits set to be stuck in Tier 2 restrictions next week are allowed to finish up the bottle – but then they have to leave.

No10 confirmed today that people are only allowed to booze alongside food in the middle tier of rules – which will come into effect next Wednesday.

A spokesperson said today: “The length of exposure is one of the main factors in the spread of the virus which is why alcohol may only be served as part of a main table meal, and cannot be served once the meal is finished.

“There is no prescribed limit for how long a meal is expected to take, however we expect people to act reasonably and exercise good judgement.”

Anything ordered before or during the meal is likely to be fine to finish after dinner.

Sources stressed it would be a “common sense” rule which means people won’t be around to sit around boozing for hours after eating.

But it will be up to the pubs themselves to exercise judgement.

The guidance states that alcohol can only be served “as part of” a meal – but does not specifically tell pubs to stop taking drinks orders after food is finished.

A substantial meal is defined as a “breakfast, main midday or main evening” meal.

Downing Street has previously clarified that means a packet of crisps would not count as a main meal.

The rules limiting the sale of alcohol previously only applied under the old Tier 3 rules.

But yesterday, 55 million people in England were flung into beefed up Tier 2 and Tier 3 lockdown restrictions.

Now pubs and restaurants in the High Covid alert level – or Tier 2 – need to serve food with drinks.

People are not allowed to meet up with people from other households anywhere indoors, including hospitality settings.

They are able to see other people who they don’t live with in beer gardens or outdoor seating.

Pubs and restaurants will have to close altogether in Tier 3.

Boris Johnson defended the new tougher Tiers this morning, saying the old system did not allow people to move down the levels and escape from drastic lockdown rules.

And Housing Secretary Robert Jenrick said this morning he expected some areas under the highest Covid alert level to be able to move to Tier 2 by Christmas.

Queen hires 85k travel guru to make sure Harry, Meghan and other royals use...