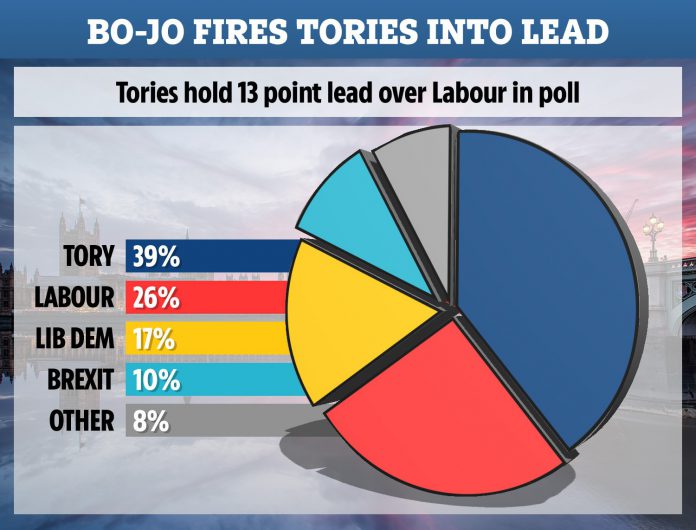 BORIS Johnson has fired the Tories to a 13 point lead over Labour as Jeremy Corbyn is rocked by a candidate crisis.

The PM has surfed waves of trouble and uncertainty to deliver a 39 per cent share of the vote compared to Labours 26 per cent.

The Lib Dems are currently third in the running on 17 per cent, according to a YouGov poll.

Mr Johnsons chances of reaching No10 suffered a hit last week when Jacob Rees Mogg caused outrage by saying Grenfell Tower victims should have had the common sense to stay in their homes.

He has also faced a fight for Leave voters from the Brexit Party with Nigel Farage vowing to put candidates in 600 seats.

However, support for Britains traditional parties has grown while Mr Farages support has dropped.

The Brexiteer boss now has just 10 per cent of the vote, where he previously had 11.

NOT A NIGE GUY

Mr Farage has repeatedly called on Mr Johnson to broker an election truce with him as Brexit Party chiefs promised to deliver a thundering majority.

But the Tories distanced themselves from the idea and instead ordered the Brexit Party to stand aside.

According to the poll 30 per cent of voters think Mr Farage is performing well as his party’s leader, while 57 per cent are not convinced leading to his approval rating of minus 27 per cent, the Mail on Sunday reports.

It comes as he faces a crisis weeks ahead of the General Election with an incredible 13 Labour candidates embroiled in offensive slur scandals.

While Dame Margaret Hodge, one of the partys most prominent Jewish figures, refused to endorse the Labour leader as a future Prime Minister in a bombshell interview.

While Labour shadow minister Dan Carden is the latest in the party to be involved in controversy.

Last night it emerged Mr Carden had been accused of singing “Hey Jews” to the “Hey Jude” Beatles classic on a raucous coach trip.

Experts said they made up a dodgy dozen raising serious questions about Labours vetting process.

Three of the latest to be unmasked dropped out of the Election. But the fourth Ian Byrne is still clinging on.

Byrne, selected for the safe Labour seat of Liverpool Derby West, colluded in sick jibes against female politicians and made a rape joke.

In a further dash to Mr Corbyns chances of reaching No10, last week a bombshell poll predicted the leftie-boss is on course to lead Labour to its worst election result in Scotland and Wales for more than a century.

Labour is trailing the Tories in every English region apart from London and the North East and has shed more than 40 per cent of its support in its Northern heartlands in just two years.

It has nosedived to just 12 per cent in Scotland and 29 per cent in Wales once electoral strongholds – while its backing has almost halved across the Midlands and East of England since 2017.

The explosive figures were revealed in a massive survey conducted by pollsters YouGov, who asked 11,590 people across Great Britain who theyll be voting for on December 12.

Jeremy Corbyn’s Labour Party has been engulfed in slur scandals

Queen Elizabeth news: Monarch VOWS her life ‘is ALWAYS devoted to service’ as she...