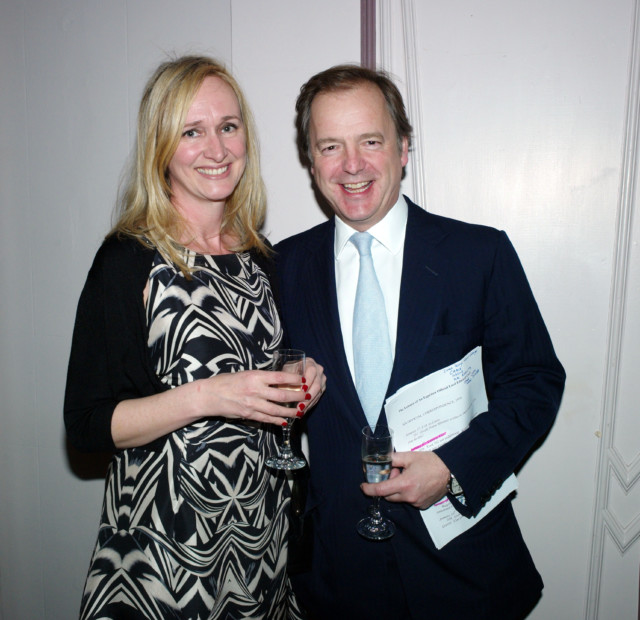 AS tell-all diaries go, they don’t get more riveting than Lady Swire’s juicy tales of the leading Tories and royals she has mingled with over the years.

Her sensational book lets rip at those in the corridors of power in a manner that is as riotously indiscreet as former MP Alan Clark’s outrageous memoirs of the Thatcher era.

Lady Sasha Swire, whose husband Sir Hugo was MP for East Devon for nearly 20 years, has released a sensational book David Cameron is derided as “drunken Dave” with a filthy mouth, Boris Johnson is branded “calculating” and “desperately lonely” with a love of cheap plonk, while hapless Theresa May is dismissed as a “glumbucket”.

There is even a dig at the Queen in the no-holds-barred book.

Mr Cameron did not deny the claims in an interview with Times Radio today, admitting: “It’s kind of embarrassing” to have “your banter . . . splashed all over the place”.

Sasha Swire, whose husband Sir Hugo was MP for East Devon for nearly 20 years, wrote her secret diary to detail what life was like as a political plus-one.

Extracts were serialised in The Times this week.

Here is a look at the best bits — and how some of those who feature in the 544-page book have responded . . .

DAVID and Samantha are thrown under the bus by their former friend, who accuses the former PM of drunkenness and lewd behaviour.

Lady Swire claims that during a coastal walk together in Cornwall in 2011, Cameron insisted she go behind him on the path because, “the scent you are wearing is affecting my pheromones. It makes me want to grab you and push you into the bushes and give you one”. She writes: “This is not flirting by the Prime Minister. This is probably lewdness. But hell, I’m so starved of masculine interest at my age it made me smile.”

The former PM denied any recollection of the incident.

He told Times Radio: “I don’t recall that conversation. If someone wrote down all your banter in private over the years, there probably might be a few bits and pieces that weren’t very flattering.”

“Dave”, as he is chummily referred to throughout the book, loves nothing more than a drink and a dirty joke, Lady Swire writes.

Their three-day break in Polzeath involved golf and boozy BBQs — all interspersed with “a lot of sex talk” from Cameron and her husband.

She claims Samantha was only able to join her husband for his resignation speech after a large Negroni cocktail.

“When they walked back inside, Dave apparently recoiled at her gin-sodden breath,” she writes.

Lady Swire says Cameron asked her and her husband to come round and bring two Cuban cigars — and “plenty of booze”.

When the pair arrived at the couple’s Oxfordshire home, Cameron made a “lethal Negroni” before knocking back “endless bottles of wine, whisky and brandy”.

On another occasion when the Camerons came to stay, Lady Swire says her husband invited Mr Cameron for a jog. And the penis jokes don’t end there.

At a birthday party for George Osborne, Sir Hugo and Cameron were “laughing uproariously” about the size of Michael Gove’s private parts.

His manhood was “like a slinky that comes down the stairs before the rest of the body,” said Sir Hugo.

In response to Lady Swire’s claims, Mr Cameron said: “Look, of course it’s kind of embarrassing when you have things you say in private and do in private, sort of splashed all over the place, and of course you’d rather that didn’t happen.

“I suppose the truth is that if you want respect for your privacy and people not questioning your character and private life and all the rest of it, then politics probably isn’t the career for you.

“So I think you’ve got to take the rough with the smooth.”

Lady Swire tells how “his blondness” Boris Johnson knocked back cheap plonk “at an alarming rate” during a dinner at No10 in August 2019.

And she recounts how she looked at his “thick, creased neck and pale, sweaty face” and he stared back “as if he was working out if I’m shaggable”. She adds: “He’d probably do the same if a sheep walked in the room.”

Lady Swire calls Boris a “political calculating machine” — but one who is “cheeky”, “enthusiastic” and “a big, fat, yellow, bouncy Labrador”.

His fiancee Carrie Symonds is referred to, in the author’s words, as his “hot young vixen” who was missing from the dinner because she had “p***ed off to Greece, apparently”.

She adds: “Boris just came across as someone who is desperately lonely and unhappy.”

At another one of their fancy dinners — this time at Hillsborough Castle in Northern Ireland — Lady Swire takes aim at The Queen.

She claims Her Maj “fixed her beady eyes on me then swanned past not saying a word”. Lady Swire takes aim at The Queen, saying she ‘fixed her beady eyes on me then swanned past’ Sir Hugo was concerned he would be knighted by Prince Andrew, worrying he would do it ‘with his todger’

She goes on to tell how Prince Philip “ranted” about how “appalled” he and his wife were that guests used laptops during Palace banquets.

And in one diary entry, the author says her husband couldn’t take his eyes off Prince Charles’s “thick Hanoverian hands” during a meeting.

Lady Swire claims to have predicted “trouble ahead” when Meghan and Harry got engaged in 2017, saying the duchess was “eating the redhead for breakfast” as Harry is “clearly not as clever as she is”.

Prince Edward is described as an “overexcitable puppy” while his wife Sophie Wessex moaned about sharing royal duties with her husband.

And when Sir Hugo was knighted in 2016, he said he was concerned it would be done by Prince Andrew, adding: “I’m not kneeling down in front of that man. He might knight me with his todger.”

Those receiving knighthoods are never told in advance who is going to do the honours, she says, “because if it’s Princess Anne everyone complains and tries to switch days”.

Lady Swire described Michael Gove as a “loose cannon”, “the most volatile member of the Government” and a “nutter”.

Cameron once “gave Gove a bollocking” and went “ballistic” when Gove attacked the number of Etonians in the Cabinet. She also takes a swipe at Gove’s wife Sarah Vine, describing her as “bending over backwards to please the Camerons”.

She is portrayed as “poor old Sarah Gove” who was “lumbered with cooking all the food”.

Sarah was “laden down with dishes of fish pie she has cooked herself” while Samantha Cameron cut patterns for her fashion business upstairs.

But writing in her column for the Daily Mail on Wednesday, Mrs Vine said she can “count on the fingers of one hand” the number of times she had met Lady Swire.

And she added: “I honestly don’t recall ever making fish pie for Samantha. In fact I don’t think I’ve ever made a fish pie in my life.

Other Tories… and Trump

Although the Camerons, Johnsons and Goves take centre stage, Lady Swire has a nickname for everybody.

Theresa May is Mrs “Glumbucket”, the “Maybot”, “Old Ma May” or “old bat, crippled by her lack of intellectual confidence” while Transport Secretary Grant Shapps is “Von Schnapps”. George Osborne, referred to as “Boy George”, was nervous to go to Elton John’s Oscars bash — which Lady Swire says is unsurprising as she “can’t imagine two more socially awkward men at a party together”.

And the PM’s chief adviser Dominic Cummings is “one of those odd amoebas you find in jars in school science labs”.

Although her insults are mostly aimed at Brits, Lady Swire also manages to brand Donald Trump as a “filthy, racist misogynist”.

Even the US President, who is said to never read, might be after a copy of this book.

EastEnders legend Danniella Westbrook shows off toned body as she sunbathes in bikini during...