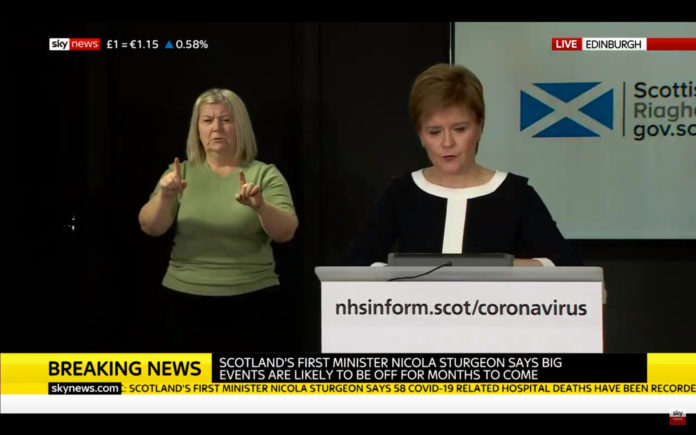 NICOLA Sturgeon today urged the UK Government to “treat people like grown ups” as she shared her draft plans for ending Scotland’s lockdown.

The Scottish First Minister today insisted that ministers should be frank with the public – after Government scientists said last night that social distancing could continue until 2021.

Nicola Sturgeon outlined her plans for easing off the lockdown In a press conference this lunchtime she said that a “return to normal as we knew it is not on the cards in the near future.”

She hinted that it may be that “certain businesses in certain sectors can reopen – but only if they can change how they work” so people stay apart.
And “classrooms may have to be redesigned” to keep their distance, or to stagger schools so they go in at different times.

Ms Sturgeon warned that “big gatherings and event s are likely to be off for some months to come” – echoing warnings from Ireland too.

She told the nation that the lockdown was working but it was also doing long-term damage.

It was causing “harm to the economy, living standards, to children’s education, to aspects of our physical health and metal health and wellbeing.”
“We must try to find a better balance than the one we have right now,” she stressed.

Ms Sturgeon stressed the strict measures were still “absolutely necessary, but said Scotland needs “to chart a way forward” to live with the virus over the coming months.

“What we must do is find a new normal, a way of living alongside this virus but in a form that keeps it under control and stops it taking the toll we know it can do,” she said.

The First Minister also said that the reproduction rate of the virus must be kept below one, with best estimates putting the figures “somewhere between 0.6 and one”.

The First Minister also said she would be speaking with her UK colleagues about more surveillance for people flying into the country who could be infected with the virus.

A document published online by the Scottish Government noted that

Echoing Professor Chris Whitty last night, she said that social distancing might have to be in place for at least the next year.

The First Minister also urged Scots to “engage with this discussion” – and stressed that no decisions had yet been taken.

Earlier she revealed students may be allowed back to school part-time, with social distancing still in place.

She told Heart Radio: “We might have kids going back to school for certain days a week.

“We may have to have children in a classroom so that we can have social distancing.”

However, the UK Government has made it clear the UK will not leave lockdown unless several conditions are met – including a steady drop in new infections and deaths.

And ministers have insisted they will not begin to talk about how the measures will end just yet because they don’t want to “muddy the water” by talking about an exit.

The focus should be on staying home, Government ministers have repeatedly said, and they don’t want to confuse the message.

Ms Sturgeon’s announcement will come only hours after the Government’s Chief Medical Officer Chris Whitty admitted the UK might have social distancing measures in place until next year. And her intervention comes as Brits start to head to parks and more people travel on the roads in defiance of lockdown restrictions as the weather heats up.

Last night Professor Whitty said the nation was still weeks away from seeing a significant decline in numbers.

Professor Whitty said: “We are working with a disease we are going to be with globally for the foreseeable future.”

“(There are) lots of options which ministers will have to consider.”

They key to ending lockdown was to ease measures in way where no infected person is, on average, infecting more than one person.

Meanwhile, Northern Ireland First Minister Arlene Foster has said measures could be eased at a different pace than in other parts of the UK.

She said the criteria for easing restrictions “will be set down and agreed” by the Northern Ireland executive as well the UK Government.

She told Cool FM this could mean “different parts of the UK move (at) different times”.

Discontent is also growing among Conservative backbenchers who are calling for a clear, “safety-first” exit strategy from shutdown to protect the economy.

Treasurer of the 1922 Committee Sir Geoffrey Clifton-Brown is one of the leading voices in the demand for answers. Sir Geoffrey told BBC Radio 4: “We need to start this discussion of how we get back to normality.

“Whatever we do needs to be done gradually, when the figures start to stabilise more in three to four weeks, hopefully we could begin to think about what’s the next step.”

“We have to think about the number of small businesses, who unless they get some form of business, may have to cease trading.

He said it was essential to open up parts of the economy, to rescue them from being completely decimated by the lockdown.

Sir Geoffrey and other members of the 1922 Committee of Tory backbenchers called a private meeting yesterday where they unanimously expressed deep concern of the continual lockdown, according to The Times. Geoffrey Clifton-Brown MP is on the 1922 Committee

Sir Geoffrey said: “The nation is quite divided on this and it’s up to the government, I think, to exercise leadership.”

“Unless we do something fairly soon the economy is going to take a real hit.”

Vice Chairman of the committee Sir Charles Walker said “There has got to be an economy to go back to.

“All MPs right now are dealing with dozens if not hundreds of local businesses that are fearing for their future.

“Building capacity within the NHS, reducing infection rates has to be the precursor to lifting the economic lockdown. If we don’t do this many good and strong businesses will not open their doors again.

“The consequences for millions of people will be potentially devastating.”

How to redeem a code on Fortnite?

Woman rushes up to Prince Andrew’s car and bangs on windows in royal security...

EastEnders’ Louisa Lytton poses in a wedding dress as she reveals she could be...

Meghan Markle news – Duchess of Sussex celebrates Mother’s Day in the US with...