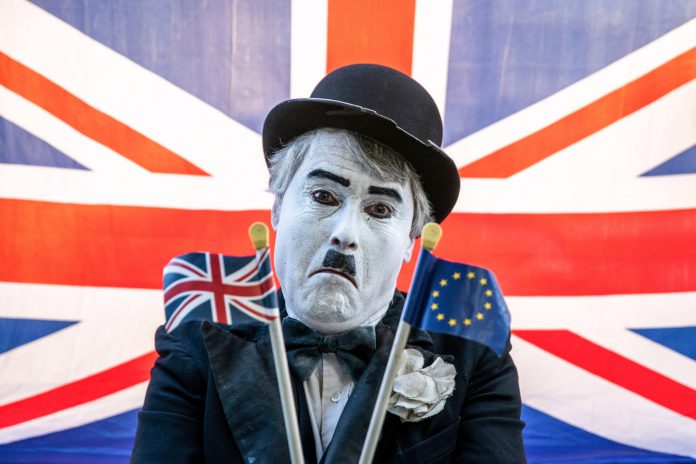 FOR the past three years our parliament has said no to Brexit.

Every time Brexit seems to gain ground, immensely clever and arrogant parliamentarians find another way to create a roadblock

At every turn of the Brexit melodramas since then, Westminster has become the Capital of Cant, the Fount of Refusals, Schloss Verboten.

Every time Brexit seemed to be gaining ground, immensely clever (and immensely arrogant) parliamentarians have wagged their fingers and found another way to create a roadblock.

Every ruse has been played by the Westminster bubble smartypants, as Tory MP Andrew Percy so blisteringly put it this week.

I do not intend to bore the knackers off you for the rest of this page by trotting through the old arguments for or against a clean/hard/soft Brexit.

All that brain-numbing jargon about Norway options and backstops and withdrawal agreements and Letwin amendments we will park in the lay-by today.

So much word soup does your head in after a while.

Instead I want to talk about the drug of despondency and the damage it is causing to both our politics and our country.

The only big figure who has resisted all this naysaying has been Boris Johnson.

If he is as far ahead with the public as opinion polls suggest, there is a reason: Boris is optimistic. Boris believes in better times.

Like Buzz Lightyear he punches the air and cries: To infinity and beyond!

What do you think when you see Big Ben or a photograph of the twirly-towered Houses of Parliament standing next to the gracious River Thames?

Most of us, I guess, used to feel a little bounce of patriotism when we heard Big Bens bongs.

But the bonging has long since ceased to have that effect indeed, the bongs dont even sound any more, owing to the repairs being done to the clock tower.

The sheer sight of Parliament now, I suspect, fills many voters with feelings of irritation and boredom, and maybe worse.

As Bonfire Night approaches, it may never have been easier to sympathise with Guy Fawkes and his gunpowder plotters.

This is, please, not an incitement to you all to burrow into the cellars under the Palace of Westminster with barrels of explosives and fizzing fuses.

But would it not be tempting to tie a stick or two of dynamite to the tail of Commons Speaker John Bercow?

Is there not at least a small part of you that would welcome a big, cartoon-style ka-boom in the Commons lavatories and seeing the likes of Hilary Benn and Dominic Grieve QC and Yvette Cooper and Sir Oliver Ruddy Letwin emerging with their faces sooted, their hairdos standing up on end and their trousers round their knocking knees?

Back in the days of the Soviet Union there was a man called Andrei Gromyko, who was almost a self-parody of grumpiness.

Gromyko was foreign minister for the Soviets from 1957-85 and he undoubtedly had a brilliant mind.

Yet there he would stand on the Kremlins viewing balcony at the May Day parades, wrapped tight into his smart coat and hat, and his grim, unyielding face said it all.

Dominic Greive is a lawyer, though you might not want him defending you in case he got up the jurys noses with his insistence that no one else can ever be right

Gromyko wanted no change. He wanted the status quo to last forever.

He became known as Mr Nyet. Thats Nyet for No, never forever. Well, the brutal Soviet empire didnt last for ever, as we now know.

Gromyko stood on the wrong side of history. Soviet Marxism was shattered and the Berlin Wall fell.

Parliamentary opponents of Brexit will one day be seen to have been similarly obstructive.

Like Gromyko, the only answer they have is the negative.

It is not because they are stupid. Labours Sir Keir Starmer, and that giggling nitwit Letwin, are well-read gents.

Hilary Benn is probably brighter than his old man Tony was.

Grieve and Anna Soubry are both lawyers, though you might not want them defending you in a big trial in case they got up the jurys noses with their stone-faced insistence that no one else can possibly ever be right.

And then theres Bercow. The soon-to-depart speaker is a chippy, itchy, batey little piglet and one of the most gloriously public cuckolds of the kingdom but he has a perfectly good brain on him.

Its not lack of cleverness that afflicts them. It is their inability to realise that the public wants hope.

Voters crave optimism in their politicians.

And after three years of this inertia, the desire for some brightness and happiness has never been keener.

That is why Boris is flying in the opinion polls. It may not be that we all like every dotted I and crossed T of his Brexit deal.

Plenty of us would have accepted No Deal. It is not that the voters have suddenly become Tories.

But they warm to the Johnsonian can-do spirit.

When everyone said he would never extract concessions from Brussels, he did.

When everyone said he was a shallow joker, he found a statesmanlike tone which hailed European civilisation while embracing British independence.

His opponents, lips curling, said he was just a racist, sexist nationalist who would sell out to Donald Trump.

Boris crinkled his eyes, spoke up for the NHS and talked of healing and progress.

Britain has had enough of the grumps and glumbuckets.

We want to be shown a way to a better place.

Parliament needs to rediscover the miraculous qualities of the words can and yes. Buzz Lightyear Boris gets that.

Britain has had enough of grumps and glumbuckets like Jeremy Corbyn

Call of Duty Warzone ‘coming to your iPhone and Android’ for first time, job...