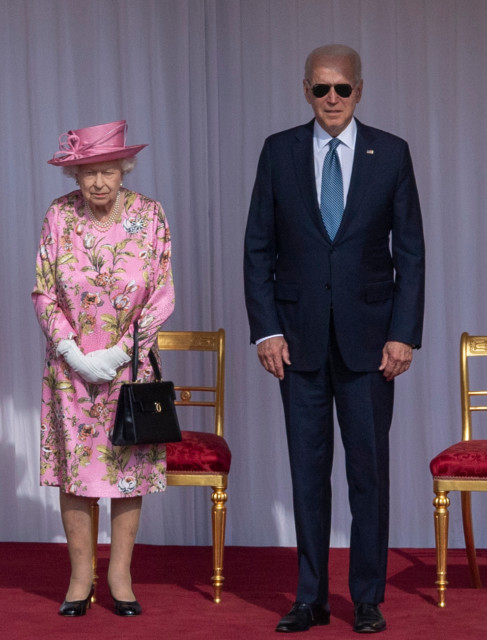 JOE Biden appears to have broken royal protocol for a THIRD time by wearing sunglasses to meet the Queen, say experts.

Photos of the US President show him wearing dark shades to fend off the sun’s glare in the UK – and looking out-of-place alongside Her Majesty.

When Mr Biden left his sunglasses on while meeting the monarch on Sunday was a “breach of protocol”, according to a former member of palace staff.

It was dubbed as a ‘gaffe’ by Newsweek.

The Queen welcomed the American leader to Windsor with a Guard of Honour and tea at the castle.

He and First Lady Jill Biden visited Her Majesty‘s Berkshire royal residence after attending the G7 summit in Cornwall.

But Newsweek reported that he “slipped up” by keeping his sunglasses while going through the castle’s Quadrangle to meet the Queen.

Grant Harrold, a former butler to Prince Charles and Camilla, Duchess of Cornwall, said: “If you’re meeting the queen face-to-face there’s no sunglasses or anything like that at all because eye contact is quite important with any introduction.

“It’s fine for Biden to have had sunglasses on but he should have removed them when he actually met the queen.

“Everyone else has to, it doesn’t matter who you are, even royals remove sunglasses when they meet royals.” The smiling Queen chats with the Bidens at Windsor Castle The monarch gestures after the photoshoot

It comes after the President committed a royal faux pas during his first meeting with the Queen when he arrived at the Eden Project for their dinner – after the monarch.

Although Biden’s 18-vehicle entourage rolled up to the Cornwall venue just five minutes after the Queen, he still broke royal protocol that dictates guests should always arrive first for official events.

According to Debrett’s, a British authority on etiquette, “It is correct for everyone to arrive before the royal personage and protocol rules that no guest should leave an event before a member of the Royal Family.”

The drinks reception was organized by Prime Minister Boris Johnson as part of the events making up the G7 summit, a meeting of the most influential world leaders, including German Chancellor Angela Merkel, French President Emmanuel Macron, and Canada’s Prime Minister Justin Trudeau.

It was also attended by other members of the royal family including Prince William and Duchess Kate, Camilla the Duchess of Cornwall, and Prince Charles.

Mr Biden also revealed what he had chatted about during a private audience with the Queen – a massive no-no protocol-wise. The President had been visiting Her Majesty with wife Jill The 95-year-old monarch met her visitors over tea The Bidens met the Queen at the conclusion of the G7 summit in Cornwall, England

He told journalists that the Queen had asked him about Xi Jinping and Vladimir Putin during his visit to Windsor in another apparent breach.

It is considered exceptionally rare for anyone – even the UK Prime Minister – to reveal the contents of their meetings with the monarch.

Biden had earlier signalled the importance of the meeting with Putin to G7 leaders on Sunday describing the current relationship between the two as at a historically “low point.”

“I think the best way to deal with this is for he and I to meet,” Mr Biden told reporters.

The remarks come ahead of his showdown meeting with the Russian leader next week as he continues his European tour. The first lady, dressed elegantly in light blue, took her husband’s hand as they arrived The Queen, who wore pink for the meeting, was flanked by guards as she awaited the Bidens’ arrival

The meeting marks the 13th sitting US president the Queen has met during her historic 69-year reign.

She has met every president since Dwight Eisenhower, except for Lyndon Johnson, who didn’t visit Britain while he was in office.

At a White House press conference before his meeting with the Queen, Press Secretary Jen Psaki said Mr Biden was excited to meet the monarch.

“Who among us wouldn’t want to meet the Queen?” Psaki asked reporters.

The Bidens dressed down when they enjoyed a drink in Cornwall to unwind from the G7 summit.

At the pub, Mrs Biden wore jeans and trainers as she ordered a red wine – while husband Joe played it safe with a Coca-Cola.

The couple relaxed next to BBC reporter Jon Sopel, who said he was surprised to see them.

He tweeted: “A first in my career @POTUS comes and sits down at table in a bar next to me and orders a drink. Am trying to act nonchalant #G7.”

Transport Secretary Grant Shapps dashes back to UK from Spain after being caught in...