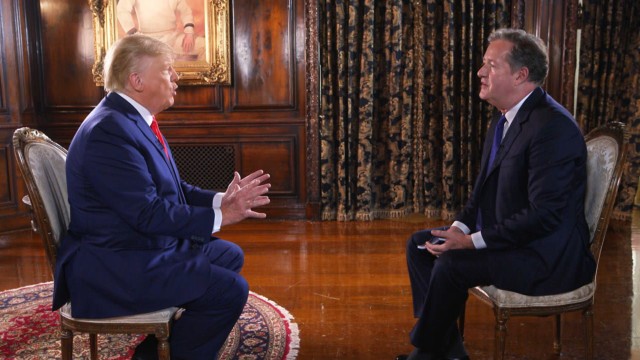 In his world exclusive interview with Piers Morgan, the ex-President told of his encounter with the late Duke of Edinburgh who he called a “tough cookie.”

And the brash billionaire said it was “terrible” that Harry had been the only senior Royal to swerve the poignant ceremony to mark first anniversary of his grandad’s death.

Donald Trump: I’m not a fan of Meghan, and I wasn’t  from the beginning.
Poor Harry is being led around by his nose. And I think he’s an embarrassment. And I think when she spoke badly of the Royal Family, but in particular the Queen you know, I met the Queen. It was supposed to be for 20 minutes.

Piers Morgan: I saw you just after you saw her.

DT: Right. It was supposed to be just a quick meeting. And it was beautiful. The pomp and ceremony, nobody does it like the English I don’t know what it is. But nobody does it.

PM: We have a certain style.

READ MORE ON THE ROYALS Prince Andrew LUNGED at me after staring at my FCUK T-shirt, says ex-aide

PM: I’ve heard other members of the Royal Family told me they enjoyed your company.

DT: We had a great time and then they honoured the United States but they honoured me that night which is really the honour of the country, and it was at the top level. And I sat next to her and we talked the whole night. And somebody said, we’ve never seen her smile so much. We had a great time. She was laughing and smiling. They said they’ve never seen her have such a good time at a state dinner. You know, normally they’re a little boring. Okay, this wasn’t boring.

PM: You know, here’s my issue with it. I think that they’ve quit the country, they quit royal duty, they’re living in luxury and California. They want to use their royal titles to exploit them for massive financial gain. Without any of the duty that comes with the royal titles. I don’t think you can have your royal cake and eat it. That’s my argument about it.

DT: I do. I’ve been a very good predictor, as you know. I predicted almost everything. It’ll end and it’ll end bad. And I wonder if Harry’s gonna go back on his hands and knees back into the beautiful city of London and say, please. You know, I think Harry has been led down a path.

PM: When I heard he wasn’t going to Prince Philip’s memorial…

PM: I couldn’t believe that he would not  go to that. He was at the Super Bowl. He was at a Texas rodeo. But he couldn’t find time to get on a plane.

DT: It was a terrible thing, many terrible things that might have been, as you mentioned, that, that might have been the worst of all, because he was, you know, like her. He was a tough cookie, too. I remember years ago, Prince Philip came to New York, and we were in the Plaza Hotel. And there were many people wanting to meet him.
And we were all taking a picture with him. Many people and the photographers said, I’ll never forget this. He was tough.

The photographer said, please move back there were like 30 of us.
And he said, ‘No, you move back’. And that was simple. I said, that’s pretty good. You know, this guy’s tough.

PM: When he died. I think it was a devastating moment for the Queen.

DT: I think they had a great relationship. But he was a strong guy and never forget a little moment, right? And he just said, ‘No, you move back’. And he didn’t say it in a nice way. Because the photographer was pushing everybody around a little bit foolishly. But I thought it was terrible when Harry didn’t go to the memorial of Prince Philip. Yeah, I think the Harry situation is going to unfold in a much different way.

PM: If you were the Queen, is it at the stage now, would you remove their royal titles?

DT: I would. The only thing I disagree with the Queen on probably one of the only things ever is that I think she should have said, if that’s your choice, fine. But you no longer have titles, you know, and frankly, don’t come around where you’re just, because her loyalty is to the country. She said that many times. Her loyalty is to the country. And I think that he has been so disrespectful to the country, and it’s a great country. I own a lot of things there. I own a place called Turnberry and in Aberdeen I own and, I mean we have Aberdeen is beautiful the oil capital of Europe and I own things there and I love that country. It’s incredible, in Scotland, I love Turnberry, I love what I did there. I built things there.

DT: Harry is whipped. Do you know the expression?

PM: I’m familiar with the phrase.

DT: I won’t use the full expression but Harry is whipped like no person I think I’ve ever seen.

PM: The most whipped man in the world.

DT: I dunno, that’s gonna be a big one, but he is a whipped man.

PM: Let’s talk about censorship. My show is called Piers Morgan Uncensored. Okay. You like the title.

PM: I chose the title because I lost my last job.

DT: I thought you overreacted by the way.

DT: The guy the guy was a stiff…

PM: It wasn’t actually about the walkout so here’s what happened…

DT: You made it about him.

PM: You’re right about it. But here’s what happened. So I watched the Oprah Winfrey interview with Meghan and  Harry, and I’m angry watching it.

DT: And you were right to be.

PM: I thought the attacks on the Royal Family were disgraceful.

PM: So let me ask you what you would have done and so then, it turns out Meghan Markle writes to my boss, at ITV and basically demands my head on a plate.
And the next day, I’m told, I’ve either got to apologise for disbelieving her. Even though it was clear she wasn’t telling the truth. Or I had to lose my job. Now what would you have done?

DT: I would have left but I wouldn’t have attacked the weatherman. He wasn’t worth it.

PM: I didn’t attack him, I left the room.

DT: No, you attacked him. He attacked you and then I would have handled differently, but that’s okay.

PM: Would you? I’ve known you for a long time. Would you have apologised in that situation?

DT: Well I thought you were right about the thing. I just didn’t like the way you handled it. Is that okay?

PM: I think you’re not wrong about, I shouldn’t have walked off.

DT: I don’t know if you’re gonna leave this on your interview.

PM: We’re gonna leave it in the interview.

PM: The show is called Piers Morgan Uncensored. You’re allowed to have your opinion.

The 75-minute interview will be screened on the launch show of Piers Uncensored on TalkTV on Monday at 8pm.

Migrant crisis ‘should worry us all’ says Nadhim Zahawi but defends Priti Patel as...

I’m a money-making expert – these easy side hustles cost nothing and even made...