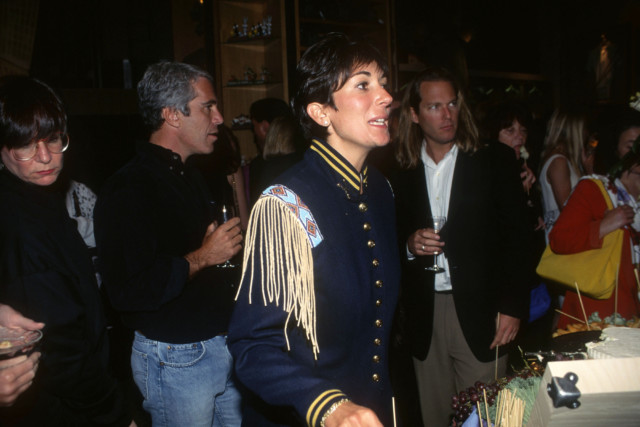 GHISLAINE Maxwell was able to infiltrate New York’s elite because she was friends with Prince Andrew, it’s claimed.

Writer Helen Kirwan-Taylor, who mixed in the same circles and was herself listed in Jeffrey Epstein’s infamous “little black book” , claimed Maxwell traded on British poshness to access the Big Apple’s rich and powerful. Writing in the Telegraph, Kirwan-Taylor lifted the lid on the high society world Maxwell operated within, recalling how she was “quick-witted, attention-seeking and the complete darling of her set”.

Maxwell, 58, is currently being held at the Metropolitan Detention Center in Brooklyn, New York, as she awaits trial on charges of conspiring with  Epstein to sexually abuse girls.

She denies all the charge

Epstein was charged with sex trafficking was found hanged in jail while awaiting trial last year.

Maxwell moved to the United States in 1991, after her crooked media baron father Robert Maxwell died in mysterious circumstances. Kirwan-Taylor, who in the 1990s was a glamourous TV producer, said a society pal told how Maxwell quickly wormed her way into New York circles because “she came with a stamp of approval from Prince Andrew”.

She said: “The thinking was if she hangs out with him, she must be OK.

“I observed how easy it was for someone with a British accent and the faint whiff of poshness to forge their way into the most exclusive circles.”

Describing Maxwell as being right in the middle of the action, she said: “Ghislaine was like a sniffer dog: sharp, alert and with a nose that could detect any useful information.”

The Duke of York said he met Maxwell while she was a student in the UK and later became friends with Epstein.

Maxwell is alleged to have been at the centre of the financier’s sex trafficking ring which lured in girls for abuse.

The Duke has been accused of having sex with one of the victims, Virginia Giuffre, a teenager who was allegedly recruited by Maxwell.

Newly released court documents contain allegations made by Ms Giuffre that she was paid nearly $1,000 for spending two days alone with Andrew.

Hundreds of pages of court files have been made public today after a New York judge unsealed them as the case continues against Maxwell over her role as Epstein‘s alleged “madam”.

The documents, which were part of a 2015 defamation claim by Ms Giuffre against Maxwell, were released despite efforts by the incarcerated socialite to keep them secret.

The files contain allegations made by Ms Giuffre that she was instructed to spend two days with the Duke at Epstein’s 7,559-acre Zorro ranch near Sante Fe, New Mexico in 2001.

During her lawsuit against Maxwell, whom she claimed recruited her as a sexual servant for Epstein, a judge struck out the allegations against Andrew as “lurid”, “immaterial and impertinent”. The Duke of York, pictured with his accuser Virginia Roberts, now Giuffre

A friend of Prince Andrew told Sun Online: “The Zorro Ranch account is a serious inconsistency.

“And now this fourth allegation. How so? Why has this never been raised before? And where is the evidence?

“I’d suggest you put these questions to her lawyers, not to the Duke.”

The pal added the US Federal Appeals court said 2019, these allegations should be treated with extreme ‘caution’.

“Allegations are not the same as facts, which is the essential premise on which justice works,” they said.

“Let’s see if these allegations stand-up, because precious few about the Duke do – where’s the proof?”

Inside Dancing on Ice final party with Joe GRINDING on Trisha, Perri eating a...