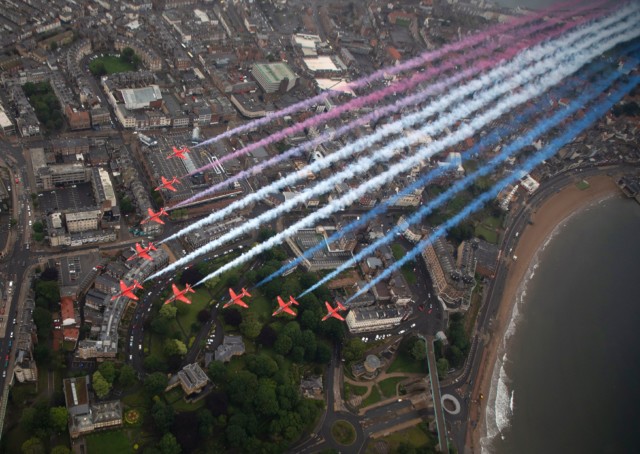 The jets flew over Scarborough, North Yorks — which had been due to host an event before the pandemic — as the Queen and PM Boris Johnson saluted the work of British servicemen and women. The Queen and Boris Johnson hailed British servicemen and women In a statement, the Queen thanked the country’s armed forces, saying: “Having had members of my family serve in each of the Armed Services, I know only too well of the pride service personnel take in their duty.

“As your Commander-in-Chief, I send my warmest best wishes to you all, your families, and the entire Armed Forces community.”

Meanwhile, Boris Johnson shared a video message on Twitter in which he hailed the contribution of the “heroes” from the British Army, RAF and Royal Navy during the Covid-19 crisis.

The Prime Minister said: “There’s a grim irony in the fact that the pandemic which our military is doing so much to fight, means we can’t hold the Armed Forces Day festivities at which we could thank you for doing so much.

“But take it from me, whether you’re a regular, a reservist, a civilian contractor, a veteran, or the family and friends who support our military in so many ways, we as a nation salute you.” Celebrations for Armed Forces Day were cancelled due to coronavirus

Coronation Street star who had to self-isolate amid coronavirus panic has been cleared and...