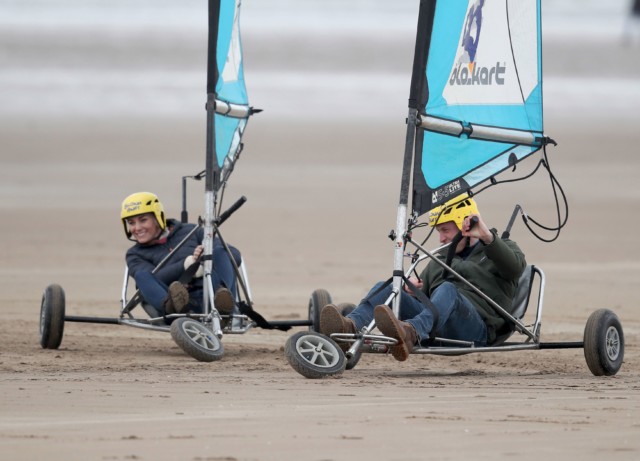 KATE Middleton and Prince William have hit the beach as they return to St Andrews University – after first setting eyes on each other as students 20 years ago this year.

They are taking a trip down memory lane going land yachting and meeting undergrads at their old alma mater. They met at St Andrews 20 years ago this year

The couple have joined young carers from the Fife area, for a session of land yachting at the beach, as part of their week long trip to Scotland.

The couple hope to highlight sustainable projects ahead of Glasgow hosting the UN’s Cop26 climate summit in November.

It was William who proved the winner when they raced head-to-head across the rain and wind-lashed beach.

Always so competitive, he had been determined to get his technique right to ensure maximum speed.  “I want to go faster. I need to make sure I’ve got the right angle,” he told twins Jamie and Guy McKenzie, who run the business.

“Wahoo,” he screamed as he pulled away from Kate, who at one point made up ground. “I’m catching you!” she shouted, laughing.

At one point they appeared to be en route for a head-on collision but William steered away at the last minute.

Both quickly got the hang of the sail-powered buggies. William was the winner of today’s race Both quickly got the hang of the sail-powered buggies

After their head-to-head race, they continued pelting across the sand on the three-wheel buggies with the others, squealing with delight as they passed each other and when one of their wheels lifted off the ground.

But right near the end of the session, disaster befell William – he got stranded in the soft sand, much to the delight of Kate

She finished the course ahead of him and shouted: “Come on, Grandad!”

He laughed it off when they finished. “That was great fun,” he said. “I loved that I got a wheel off. That was awesome.”

The McKenzie twins, who are 34, were impressed with both. “From the go, they were good. Best clients we have ever had,” said Guy.  “Both had previous sailing experience, which would have helped them.”

But they admitted they had expected Kate to win in the head-to-head race because of her greater experience as a sailor. “William won, which is not who we expected to win. We were surprised as we expected the Duchess to win.”

“He got blown away,” his brother added.

The session was hosted by Blown Away, a local company who are the only commercial land yachting company in Scotland, and host sessions in St Andrews – where the royals met.

Both William and Kate had taken gap years before finding themselves in the same halls of residence and studying Art History at St Andrews University in 2001. The royals joined young carers from the Fife area During their engagement interview in 2009, Kate recalled feeling embarrassed the first time she met her future husband.

She said: “I actually went bright red when I met you and sort of scuttled off feeling very shy about meeting you.

“William wasn’t there for quite a bit of the time initially, he wasn’t there from Fresher’s Week, so it did take a bit of time for us to get to know each other, but we did become very close friends from quite early on.” Announcing this week’s tour, a Kensington Palace spokesperson said: “The duke is honoured to be fulfilling the role of Lord High Commissioner to the General Assembly of the Church of Scotland this year.

“Both he and the duchess are very much looking forward to spending time in Scotland, hearing from a wide range of people on the issues they care about, and celebrating individuals who have gone above and beyond to support their communities over the past year.”

Upon their return to the uni, they will meet with current students and hear about how they have coped and supported one another during a difficult year.

Yesterday the Duchess of Cambridge joked with children, telling them “I’m the Duchess!” on another stop of their trip.

Kate spoke to the schoolchildren as they visited the European Marine Energy Centre on day five of their visit. The duchess beamed during the visit The couple met with local carers from the fife area

The couple put on a united front on their first official trip to the area following Prince Harry’s scathing “truth bombs” last week.

The royal couple jumped on a helicopter heading to the remote archipelago for the next stop on their Scottish tour.

The Firm has been rocked by the Duke of Sussex unleashing a string of bombshell claims that started with the interview he and his wife Meghan gave to Oprah Winfrey in March.

The 36-year-old went on to speak to Dax Shepard on the Armchair Expert podcast – saying his life was like the film The Truman Show and that he felt “more free” since moving to the US.

The duke also said he moved to America with Meghan and baby son Archie to escape his “genetic pain”. The pair zipped around the windy beach Harry then claimed his family had showed “total neglect” for his mental health in the Apple TV documentary The Me You Can’t See.

And he accused his father Charles of letting him and his brother “suffer” in childhood.

Will and Kate also took a step back from the drama surrounding Martin Bashir’s BBC interview with Princess Diana.

The broadcaster was plunged into crisis on Thursday after being found to have covered up Bashir’s lies and deceit when securing the chat with William’s mother.

On Saturday, William issued a scathing statement about the BBC’s actions saying the lies about the royals “played on her fears and fuelled paranoia”.

The future king insisted the BBC’s failings “not only let my mother down, and my family down; they let the public down”.

Meanwhile, Charles is said to be furious that “lurid lies” from Panorama’s interview with Diana took 27 years to finally be publicly corrected.

A friend of the Prince of Wales said: “The narrative that came from that interview about Charles needs to be changed.

“He is privately furious that it has taken 27 years. The interview and allegations caused long-term damage to the future king and his household.”

Kate Middleton says she ‘can’t wait to meet’ baby Lilibet and wishes her ‘all...

How to make the Queen’s favourite chocolate biscuit cake – and you don’t need...

EastEnders star Maisie Smith angrily hits back after being called ‘vain’ for posing on...