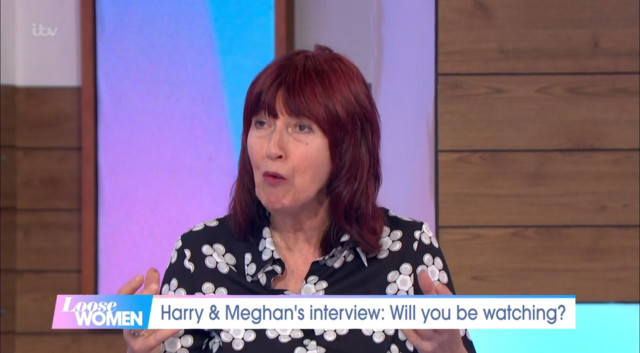 IN the announcement that has divided the country, it appears the Loose Women stars are also split over Harry and Meghan’s upcoming interview with Oprah Winfrey.

The Duke and Duchess of Sussex will appear on a bombshell 90-minute special with the media mogul lifting the lid on Megxit, which will air on US TV next month.

For the Loose Women discussing the issue on today’s show, each of the panellists had their own strong points of view, with Janet Street-Porter and Denise Welch having a verbal row on the matter.

Host Charlene White asked if given the opportunity, would she interview Meghan and Harry.

“Well it’s not the kind of interview that I do because I don’t normally do interviews from the bended knee position,” Janet pithily replied to the audible gaps of shock from her fellow panellists.

Janet went on to say she could not understand why they would do a tell-all interview when all the couple has asked for is privacy. Denise then admitted, she has “never been so passionately in support of two people that I have never met before”.

She then pointed out all the “vilification” Meghan had received from media and British public during her first pregnancy with her son Archie.

Janet then pivoted the conversation to ask Denise: “Do you think that they can still be patrons of charities in this country if they’re a resident in California?”

A confused Denise replied: “It’s up to the charities themselves if they want them.” Janet continued: “But I question whether you can have the same impact from the other side of the Atlantic.”

To which Denise replied.: “I’m sure if they [charities] didn’t want them to be patrons any more, they’d step down.”

Host Charlene tried to step in to defend the royal couple before Janet interjected.

“This interchange with the three of you and me just proves you can’t talk about Meghan in a balanced way…” Janet told the pair.

Denise stepped in to reply: “But she’s not discussed in a balanced way, Janet. The press are vile to her. “The privacy thing is that they’ve asked for no unauthorised intervention into their lives.

“They can’t possibly be unprivate, they’re Meghan and Harry.”

Janet ended the heated debate telling Denise “I think you do a good job of sticking up for them” and “we’ll have to agree to disagree.” The interview special – set to be aired on March 7 – has been billed as a prime time special that will see Meghan, 39, speak about topics ranging from “stepping into life as a royal, marriage, motherhood, philanthropic work, to how she is handling life under intense public pressure”.

But a source close to the couple today suggested the couple did not want to upset the Queen with the tell-all chat.

They told The Evening Standard that Meghan, 39, and Harry, 36, still have a good relationship with the 94-year-old monarch and are determined nothing in the interview would upset her. But despite CBS making the bombshell announcement yesterday – just a day after Meghan and Harry revealed they were expecting baby number two – it has been claimed the interview has not been recorded yet.

CBS said in a statement: “Winfrey will speak with Meghan, The Duchess of Sussex, in a wide-ranging interview, covering everything from stepping into life as a Royal, marriage, motherhood, philanthropic work to how she is handling life under intense public pressure.

“Later, the two are joined by Prince Harry as they speak about their move to the US and their future hopes and dreams for their expanding family.”

ITV reported that the deal was signed over the weekend to air on that channel in the UK.

Meghan Markles BFF Misha Nonoo praises her as a wonderful friend & the inspiration...

Strictlys Catherine Tyldesley likes tweet saying judges got it wrong after being axed and...

Heathrow Airport warns of up to 25,000 job cuts as it launches voluntary redundancy...