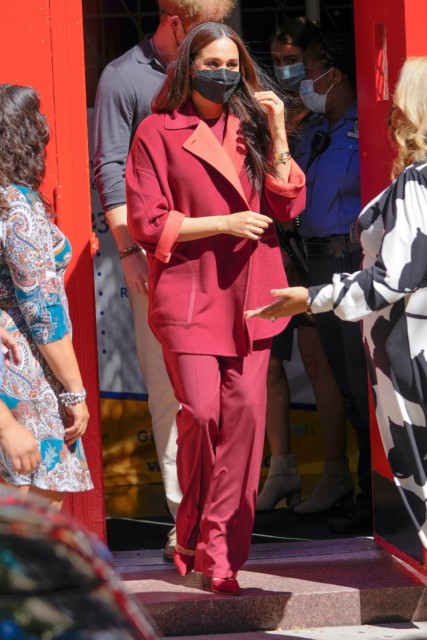 MEGHAN Markle and Prince Harry visited a school in Harlem today to visit the children and read from her new book, The Bench. According to data from the NYC Department of Education, an estimated 95 percent of students at the school fall on the economic need index.

The couple turned up to the school late Friday morning, after leaving their luxury hotel, Carlyle Hotel, in Manhattan in their fleet of gas-guzzling SUVs filled with their security team.

Meghan wore a luxurious £4275 Loro Piana cashmere coat and matching £1229 pants for her visit to the public school which was announced as a way to promote early literacy.

Her shoes are believed to be £486 Manolo Blahnik red suede pointed toe pumps.

She accessorised her look with almost £219,585 worth of jewellery including her £271,000 engagement ring, a £2415 diamond ring from her first engagement with Harry as his fiance, Princess Diana’s £17,800 Cartier tank watch and a gold bracelet.

Meanwhile, Harry opted for a casual look, in beige chinos and a long-sleeve navy polo shirt.

The couple began their visit to school chatting to the children and looking at the brightly coloured mural the children had made.

She then took to the stage at an outdoor reading event to read her children’s book, The Bench to a group of second-grade students.

The book was inspired by a poem Meghan made Harry from Archie, their eldest child, for Father’s day.

The Bench, was released on June 8 and explores the ‘special bond between father and son’ as ‘seen through a mother’s eyes’.

The couple also donated two garden boxes with vegetables to the school.

The couple are staying at the lavish hotel, where top-tier rooms cost up to £6440 a night, during what is their first public appearance since they shocked the world by quitting as senior working members of the royal family last January and moving to California from London.

The couple are next expected to appear live from Central Park for a Global Citizen Live event to promote the Covid vaccine on Saturday.

Artists such as Ed Sheeran, Sir Elton John and Coldplay are scheduled to perform as part of a number of shows being hosted in cities across the world. Harry sat with the kids as Meghan read her book, The Bench to them

Plus, Meghan gives her first update on daughter, Lilibet, whilst in New York.

And, why Meghan and Harry’s Christmas visit ‘could cause grief’ for the royal family.

Lags will spend more time locked up in their cells even after lockdown is...

Inside Adele and Meghan Markle’s unlikely friendship: how the Royal may have encouraged the...

Thousands of hard-up households can get £500 within weeks – how you can get...