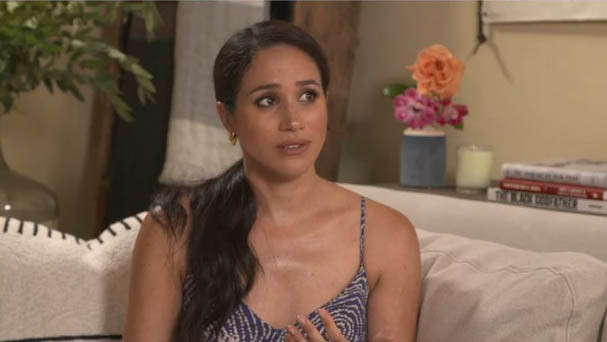 MEGHAN Markle has been accused of ‘ripping off’ a Netflix documentary in her speech about the social media ‘addiction’.

The Duchess of Sussex‘s 15-minute speech for a £1,342-an-hour conference was slammed by viewers for being suspiciously similar to Netflix’s The Social Dilemma.

Not long after Meghan look part in Fortune’s Most Powerful Women Next Gen Virtual Summit yesterday, social media users pointed out her comments on the dangers of social media addiction were almost identical to those from The Social Dilemma – Netflix’s documentary about the dark side of social media.

Some even accused Meghan of “plagiarism” and said she had “ripped off” the documentary.

One wrote: “Omg, so Meghan paid to speak again for Fortune and ripped off the Netflix documentary The Social Dilemma theory about social media users being like drug addicts and had the cheek to say she hasn’t been on it [social media] for four years?

Another wrote: “Meghan has plagiarized her quotes from The Social Dilemma.”

“Someone clearly watched The Social Dilemma recently..” said another.

The 39-year-old who likened those on social media to drug addicts said: “I have for my own self-preservation not been on social media for a very long time. I had a personal account years ago which I closed down.

“Then we had one through the institution in our office in the UK. That wasn’t managed by us, that was a whole team.

“That comes with the territory for the job, I have made a personal choice to not have any account so I don’t know what’s out there and for many ways that’s helpful for me.

“I have a lot of concerns for people that have become obsessed with it and so much a part of our daily culture for so many people that it’s an addiction, like many others very things in this world. “And there is something in there algorithmically creating this obsession that I think is very unhealthy for people.”

Wearing a blue and white dress and with her hair tied back, Meg said: “If you don’t agree with [something], don’t be part of the problem, be part of the solution.

“Don’t, hate share – share something from the right side of the issue so that that’s what goes viral.”

On theme of “amplifying only the positive” she added: “You don’t reward bad behaviour with your dog, so you shouldn’t do it with anything else.” Meghan recommended remembering the phrase “My faith is greater than my fear” when taking action.

She also said becoming a mum made her “more concerned for the world’s future”, thinking about “how can I make this better” for son Archie.

And she talked about how she “found the courage” to move to California, admitting: “It’s not easy.”

She was quizzed during a 15-minute web interview screened online for Fortune Most Powerful Women Next Gen Virtual Summit.

The online chat comes three weeks after an earlier ‘Next Gen’ summit when she denied being “inflammatory”.

Last night’s webinar was billed as ‘One on One: Courageous Leadership’, with Meghan, The Duchess of Sussex.

The chat advertising Meg’s talk last night read: “How do you lead with your values? We are joined by Meghan, Duchess of Sussex, who shares how she’s learned to, in her words, chase her convictions with action.”

Last week Meghan and Harry spoke to Nobel Prize laureate Malala Yousefzai, 23, who was shot and left for dead by the Taliban for wanting to go to school.

It came days after the duchess said she was the “most trolled person in the world” last year and the online abuse was “almost unsurvivable”.

Harry and Meghan stepped down as senior royals at the end of March.

They moved into a $14million mansion in Montecito, California.

Kelly Brook ‘exposes’ her pal as The Masked Dancer’s amazing Scissors live on her...

Im A Celebritys sexiest shower scenes ever from Myleene Klass and Katie Price to...

I’m an Emmerdale superfan – these are my most unpopular opinions