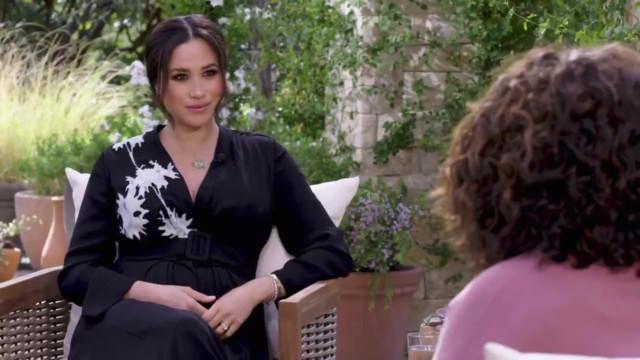 MEGHAN Markle’s stylish look for her Oprah Winfrey interview is being compared to an iconic portrait of fellow American Wallis Simpson.

Prince Harry’s great-uncle King Edward VIII famously abdicated the throne so he could be with Wallis, and a portrait was made in 1936 before she became the Duchess of Windsor.

In the portrait Wallis wore a black dress with a floral pattern, and had her hair in a centre parting.

Meanwhile, Meghan can be seen in the teaser trailer wearing a black £3,300 Armani dress featuring a lotus flower design, and also has her hair pulled back in a centre-parted up-do.

However, there are some subtle differences between the looks, with Meghan’s dress having long sleeves and Wallis’ dress having a floral design all over the dress.

Fans were quick to draw comparisons between the two, particularly in the wake of Meghan and Prince Harry revealing they will not return as senior royals, less than three years after tying the knot. In a 1936 portrait of Wallis Simpson, the American divorcee also wore a black floral dress The Duke and Duchess of Sussex’s bombshell interview airs in the US on Sunday, but two preview clips have been released

One wrote: “Idk does no one else feel the serious Wallis Simpson vibe coming off Meghan in that trailer.”

Another added: “Meghan’s stiff posture is the spitting image of the Duchess of Windsor – surely deliberate??”

Meghan’s jewellery in the Oprah chat, which airs on Sunday in the US, and on ITV on Monday, also has links to Wallis.

The Duchess of Sussex, 39, wore a dazzling Cartier diamond tennis bracelet from Princess Diana’s jewelry collection, and a £5,000 Cartier love bracelet, which is believed to have been a present from Harry.

The Duke and Duchess of Windsor each had earlier versions of the Cartier Love Bracelet. There are some subtle differences between the looks, with Meghan’s dress having long sleeves and Wallis’ dress having a floral design all over the dress

It’s not the first time Meghan has been compared to Wallis.

Previously, editor of Majesty magazine Ingrid Seward drew comparisons between the Duchess of Sussex and Wallis to Fox News.

The American divorcee’s marriage to King Edward VIII in 1937 meant he became the first-ever monarch to abdicate, changing the path of history – and eventually leading to Queen Elizabeth II ascending to the throne.

Ingrid claimed Megxit was a “very similar scenario” to the abdication crisis because Prince Harry “seemingly gave up everything” for his wife – just like his late great-uncle.

Meghan was previously married to film producer Trevor Engelson for two years before they divorced in 2013 – and she met Prince Harry in 2016. The author of Prince Philip Revealed: A Biography said: “Wallis hated England. She hated the climate and felt people didn’t understand her or her sense of humour.

“In the case of Meghan, I think she very much felt that the British people didn’t understand her or particularly liked her.

“And I don’t think she was a great fan of England either. Her home is California and that’s where her heart is.”

After Megxit was announced in January, Prince Harry and Meghan temporarily lived in Canada before fleeing to Los Angeles as the coronavirus crisis took hold.

In August, the couple moved into a £11m mansion in Montecito which insiders claim is their “forever home”. Meghan’s £3,300 long triple silk dress features a lotus flower design, which Meghan chose for its “symbolic meaning of revival”, it has been claimed

Oprah’s very rare sit-down interview with Prince Harry and Meghan is scheduled to air on CBS on March 7 from 8pm (US time).

The couple sat down with Oprah to record the chat last Tuesday, it’s understood.

In the sneak preview, Oprah confirms that “there is no subject that is off limits”, and said the couple had revealed “some pretty shocking things” – some of which seemed “almost unsurvivable”.

Holding hands with his Meghan, Harry says in the upcoming chat: “You know for me, I’m just really relieved and happy to be sitting here, talking to you, with my wife by my side.

“Because I can’t begin to imagine what it must have been like for her, going through this process by herself. All those years ago.

“Because it’s been unbelievably tough for the two of us, but at least we had each other.”

Meghan is then heard saying: “Yeah.” In the sneak preview, Oprah confirms that “there is no subject that is off limits”

“I just want to make it clear to everybody there is no subject that is off limits.

“Almost unsurvivable, sounds like there was a breaking point.”

Harry replied: “My biggest concern was history repeating itself.”

The “primetime special” with Meghan and Harry was initially set to last 90 minutes, but CBS have now reportedly extended that to two hours. And she only learned of it when US TV network CBS hurriedly issued a statement on Monday – after a producer working for Oprah mistakenly alerted ITV of the plans, the Mail on Sunday reported.

News of the big interview emerged after the couple announced Meghan’s third pregnancy – and days before Buckingham Palace confirmed the pair will never return as senior royals.

Members of the Royal family usually run potential TV interview opportunities past the Queen in advance.

Harry and Meghan were forced to reveal the interview ahead of schedule after ITV were tipped off.

The couple are believed to have spoken about marriage, parenthood, life as royals and their charity work during the discussion.

And Meghan Markle and Prince Harry launch new Archewell logo with the word ‘service’ after cruel jibe at Queen.

Meghan Markles dad Thomas WILL testify against her in court, her sister Samantha says

Passengers to be refunded for cancelled Christmas train and coach tickets

SNP MP Amy Callaghan, 28, rushed to hospital after collapsing at home from brain...

Pokemon GO: How to beat Giovanni