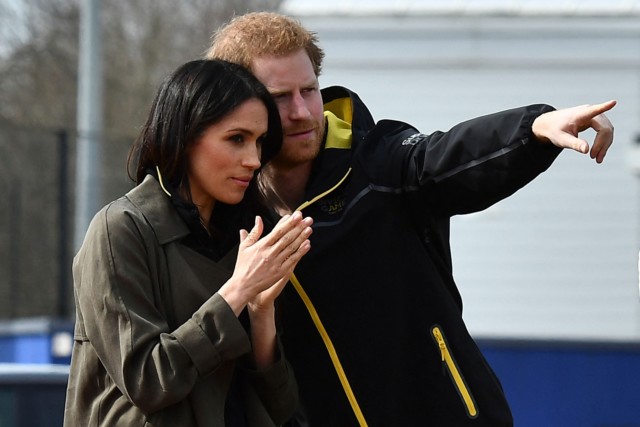 PRINCE Harry and Meghan Markle have been warned to tighten security at their LA mansion after four bears were spotted prowling in the area.

The Duke and Duchess of Sussex were alerted to the black beast sightings near their home in Montecito, California, just as Meghan is about to give birth to their second child.

The Duke and Duchess of Sussex live in Montecito, CaliforniaFour black bears have been spotted near Meghan and Harry’s LA home

One bear tried to attack a neighbour’s chicken coop last month, while two adults were seen roaming in the hills of Santa Barbara.

A mother was later spotted with two cubs.

A residents’ group, which Harry and Meghan belong to, sent emails warning them of the potential dangers, The Mirror reports.

Sharon Byrne, boss of the Montecito Association, said during an online meeting: “We’ve nicknamed the male bear Carlos and now he has a Carla to go with him.

“It’s spring, they’ve woken up and they’ve been seen in the past two weeks.

“One at the eastern edge of Montecito and one at the western edge in the space of a day.

“We’ve also had a sighting of the mama bear with cubs.” The group urged locals to freeze any waste food so as not to attract the animals, and also to buy bear-resistant bins.

People were also advised to keep their chickens – of which Meghan and Harry have several – in a secure area.

The Sussexes and baby son Archie moved into their nine-­bedroom, 16-bathroom pad in the wealthy community of Montecito in early July last year.

Several others have been spotted since, with the California Department of Fish and Wildlife blaming the smells from the number of chicken coops.

Spokesman Tim Daly said: “It’s not like they can’t afford fresh eggs but for some reason the folks there think they need a chicken coop and that’s what’s attracting the bear.”

HOAR revealed in October that Carlos – the first wild bear spotted in the area – was saved from being killed.

An unnamed local officially applied to have the bear euthanized but the proposal was rejected by the California Department of Fish and Wildlife. Montecito is a small and affluent seaside city in Santa Barbara County, California

Black bears weigh up to 39st and can grow to more than 500lbs. They can also roam 15 miles to find a meal.

Fatal attacks on humans are rare in the US, but in June 2020 a 19-year-old was attacked in her backyard in Sierra Madre, north of Los Angeles.

A homeless man was also attacked in the area the previous year.

As well as bears, the Duke and Duchess were warned last year that a mountain lion was on the loose in their area.

The big cat, also known as a cougar, roared at a pet German shepherd in a garden less than two miles from the Sussexes’ pad.

The latest threats come as Meghan is about to give birth to her second child with Harry.

Their daughter is expected to be born on June 10 – on what would have been Prince Philip’s 100th birthday, according to sources in the US.

Royal insiders say the Sussexes may even name the tot Pip in a nod to Harry’s grandad, Philip, who died in April aged 99.

They are also considering Lily after the Queen’s family nickname Lilibet, but Diana is currently the bookies’ favourite at 4-1.

It also comes as Mum-of-two to-be Meghan is about to become a published author.

Her children’s book The Bench is published on Tuesday, but copies are already being sold.

She has dedicated it to husband Harry and son Archie, saying they make her heart go “pump-pump”, The Mail on Sunday reports.

Love Island fans praise Priscilla for standing up to patronising Mike after he patted...