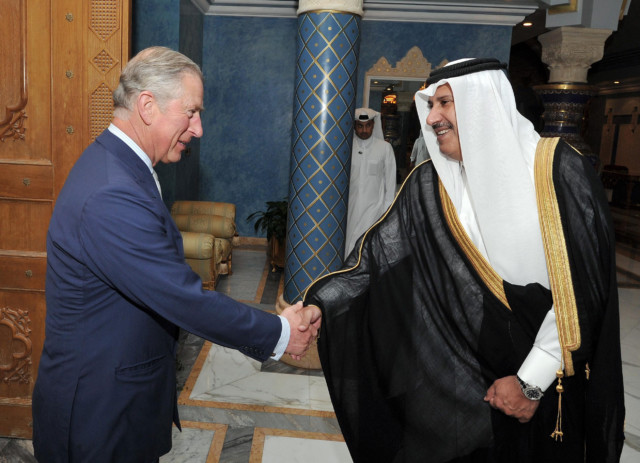 THE €3million in cash stuffed into bags and handed to Prince Charles by a Qatari sheikh is to be investigated by the charity watchdog.

Three payments of €1million each — totalling more than £2.5million — were accepted by the heir to the throne during private meetings between 2011 and 2015.

Charles could be interviewed as part of an investigation into the £2.5million-plus in cash he accepted from a controversial Qatari sheikh
The donations — reportedly inside Fortnum & Mason carrier bags, a holdall and suitcase — were deposited into the Prince of Wales’s Charitable Fund

However, as part of its investigation the Charity Commission may now interview fund trustees, including Charles.

It can also freeze accounts if it discovers serious wrongdoing, suspend or remove trustees or make referrals to the police. It comes as another of Charles’s charities, the Prince’s Foundation, is being probed by police amid a cash-for-honours scandal.

HBJ, once estimated to be worth more than £9.5billion, is believed to have handed Charles the first €1million instalment in 2011 — stuffed in carrier bags from posh store Fortnum & Mason.

In 2015 the prince accepted a holdall containing a further €1million during a one-on-one private meeting at Clarence House, with two aides counting the money.

A suitcase with another €1million was also personally handed to Charles on another occasion — with total donations coming to more than £2.5million.

The heir to the throne has met HBJ several times, including during a 2013 Middle East tour while he was Qatar PM.

However the meetings where the money was given do not appear on the list of official engagements undertaken by working royals.

A Charity Commission spokeswoman said: “We are aware of reports about donations received by The Prince of Wales’s Charitable Fund. We will review the information to determine whether there is any role for the commission in this matter.”

A source added that the payments will be verified and fund trustees may be questioned before its next steps are decided. The heir to the throne has met HBJ several times, including during a 2013 Middle East tour while he was Qatar PM

Charities are allowed to accept donations in cash, but they must exercise due diligence to avoid money laundering and corruption.

Private bank Coutts is reported to have collected the money at the request of Palace aides and deposited it into the fund’s account.

Clarence House insisted all the proper procedures were followed and said some details in a report by the Sunday Times are disputed.

A spokesman said: “Charitable donations received from Sheikh Hamad bin Jassim were passed immediately to one of the Prince’s charities who carried out the appropriate governance and have assured us that all the correct processes were followed.”

Northern Ireland Secretary Brandon Lewis said yesterday he was confident the donations would have gone through “proper due process”.

“I’m confident having had some dealings with charities, The Prince’s Trust, The Prince’s Foundation, around the Palace in the past myself, that these will have gone through proper due process.”

Meanwhile, another of Charles’s charities — the Prince’s Foundation — is at the centre of a police probe over a cash-for-honours scandal.

He was one of the most prolific donors to the prince’s charities and even has a forest named after him — the Mahfouz Wood at the 15th-century Castle of Mey in Scotland, formerly the Queen Mother’s home. Is that you Ma’am?

Glastonbury moment goes viral as the ‘queen’ is ‘spotted’ in crowd The 6 things you are wearing that make you look cheap, according to a fashion expert

He was awarded a CBE at a private ceremony at Buckingham Palace in 2016.

At the time, Clarence House insisted Charles had “no knowledge” of the alleged offers.

Will Jeremy Corbyn resign after the election and who could replace the Labour leader?

Queen’s birthday: How old is she and why does she have two birthdays?