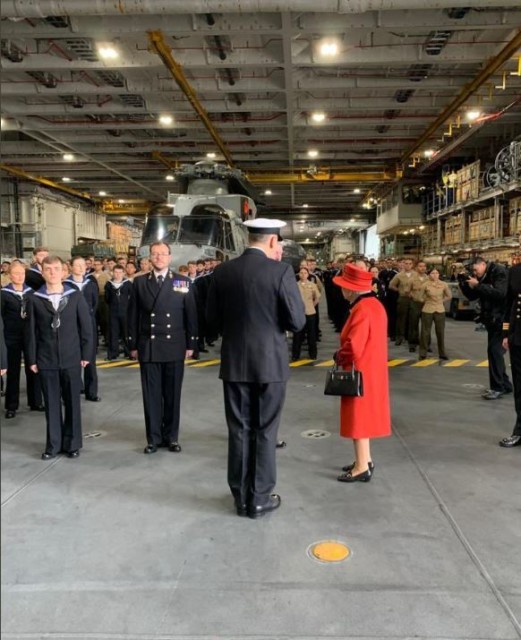 THE Queen is visiting a £3.2billion warship in her first public appearance since Prince Harry’s latest broadside at his “nightmare” life as a royal.

The monarch is touring the Navy’s flagship aircraft carrier HMS Queen Elizabeth – or ‘Big Lizzie’, as the vessel is affectionately known – amid a tumultuous week for the Royal Family. Her visit comes two days after Prince William slammed the BBC for ‘tricking’ his mother – and just over 24 hours after Prince Harry took yet another potshot at his family as he accused them of “total neglect”.

And yesterday afternoon, William admitted “lockdown has tested everyone” as he made an official visit to Scotland after Harry’s latest claims aired.

But despite the drama, Her Majesty – who is wearing a military-style brick red cashmere coat – was seen putting on a brave face as she chatted with officers.

Touchingly, she is also wearing a brooch gifted to her by the Duke of Edinburgh.

Prince Philip served in the Navy during the Second World War, and was even mentioned in dispatches for his role in the Battle of Cape Matapan.

It’s the Queen’s first public engagement since she attended the RAF memorial in Runnymede in March, although earlier this month she conducted the state opening of Parliament.

She is paying her visit to the 65,000-ton ship ahead of its maiden voyage as part of Carrier Strike Group.

During the tour, it’ll cover 26,000 miles – further than the distance around the equator.

The ship will sail to the Middle East before F-35 jets are launched to strike at Islamic State targets in Iraq.

The strike group will then sail through the Suez Canal, out to the Indian Ocean and on to the Philippine Sea.

HMS Queen Elizabeth is scheduled to make a number of port stops along way – including Oman, Singapore, South Korea and Japan.

The vessel is the largest and most powerful ship ever constructed in the Navy, with capacity for 40 jets.

However, it last month sprung a leak, which allowed thousands of gallons of salt water to flood in.

Despite the ship’s plumbing issues, forces chiefs say its voyage will be the most powerful UK naval deployment in a generation.

The Queen, who stepped aboard hours after Boris Johnson met officers, has not made any comment on either of the latest stories to embroil her family.

But despite her dignified silence, she has faced another challenging week. The HMS Queen Elizabeth – or ‘Big Lizzie’, as the ship is affectionately known – will soon depart for the Middle East The flagship aircraft carrier is so huge, it has prison cells and an operating theatre – as well as 226 miles of pipes

On Thursday, William blasted the “lurid and false claims” Bashir made to score his infamous 1995 interview with Diana.

The Duke of Cambridge said the lies about the Royal Family “played on her fears and fuelled paranoia” – while brother Harry said the probe was the “first step towards justice” for their mum.

Welcoming Lord Dyson’s bombshell report into how Bashir conned Diana into giving the Panorama interview, and the Corporation’s cover-up into his behaviour, William said: “The findings are extremely concerning.

“It is my view that the deceitful way the interview was obtained substantially influenced what my mother said.

“The interview was a major contribution to making my parents’ relationship worse. And has since hurt countless others.”

The BBC faces losing £3.2bn if the £159-a-year licence fee is slashed in the wake of the report.

And Princess Diana’s brother has reportedly called on Scotland Yard to investigate the BBC over the interview.

Earl Spencer is said to have written to Met Police commissioner Cressida Dick alleging his “vulnerable” sister was the victim of blackmail and fraud.

Meanwhile, hours after William’s statement was released, a new documentary featuring Harry accusing his family of “total neglect” for his mental health was made available on streaming platforms. In a new documentary released on Friday, Harry accused his family of ‘total neglect’ when it came to his mental health Meanwhile, William – who today met Nicola Sturgeon during an official tour of Scotland – admitted lockdown was tough on everyone The Duke claimed Charles left him to “suffer” – while Meghan wept into her pillow after she was ‘smeared’ by The Firm.

Doc The Me You Can’t See comes just ten-and-a-half weeks after Harry and Meghan’s Oprah interview aired – but features a new slew of complaints at the royals.

Many of the allegations the pair made to Oprah in March are being investigated privately by the family — although the Queen has said “some recollections may vary”.

Sources close to Prince Charles, 72, said he is hurt over being made the villain.

A royal source said: “Father and son relations are at their lowest-ever point.

“Harry says he wants reconciliation, but has clearly decided to ­villainise his father. Charles is just at a loss about what to do.

“Harry doesn’t seem to take into account that parenting styles have radically changed over recent years, especially the role a father plays.

“It’s just so wounding to Charles. He’s a sensitive man and these personal attacks hurt deeply. He can’t understand why Harry is doing this to him.

“He did so much for the wedding and even helped him move to Canada — contrary to what Harry has said.

“Charles is also frustrated that he can’t respond publicly to these accusations and the outlets that Harry is using do not have the burden of a right to reply.

“Harry just has carte blanche to say what he likes about his father while Charles must remain silent.” And Her Majesty has long visited the UK’s aircraft carriers. She is pictured in a Land Rover on HMS Eagle in 1959

Did you miss our previous article…
https://www.hellofaread.com/royal/lady-gaga-got-pregnant-after-being-raped-by-music-producer-she-reveals/

PS5 stock: When will PlayStation 5 be available at GAME, Argos, Currys and Amazon?

Diego Maradona’s life in pictures from genius on the field to scandal-hit Argentinian legend...

Fortnite DOWN – Game shuts off for all players as update 12.30 looms

Coronavirus test makers ‘mystified’ by Matt Hancock’s vow to carry out 100,000 a day...