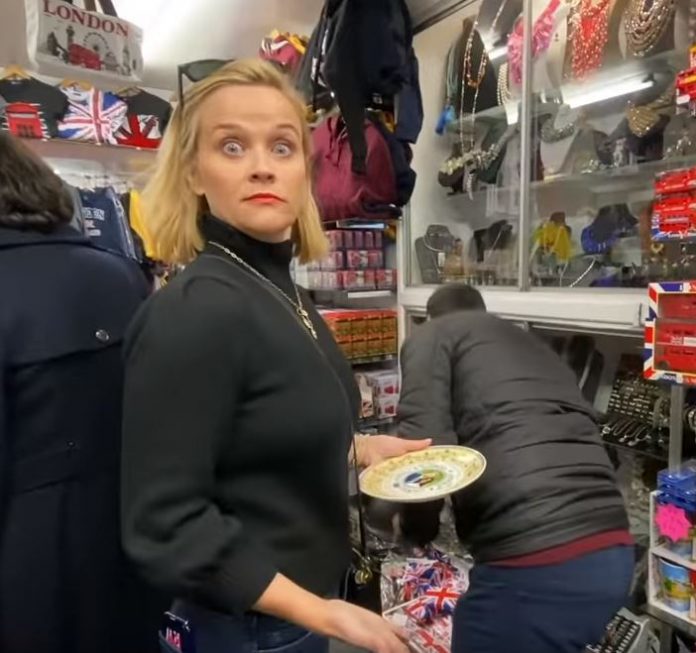 REESE Witherspoon has proven herself to be quite the royalist after purchasing a Meghan Markle plate during a recent trip to London.

The Legally Blonde actress, 43, visited the capital to promote her new Apple TV series The Morning Show and decided to indulge in a little souvenir shopping.

Reese shared a video diary of her trip on YouTube where she revealed her excitement over visiting the city.

She said: I am so excited because London is one of my favourite places to go in the entire world. I love to shop here and I love to go see stores that you dont see anywhere else in the world.

After taking a trip to Westbourne Grove, the star then heads to Portabello Road to look for her royal souvenir.

She says: I am on Portabello road and I am going to find a plate with Meghan Markles face on it maybe Kate Middleton.

She was also seen admiring a plate featuring the Cambridges

Reese can be seen heading in to a traditional London souvenir shop where she is seen purchasing a plate featuring both Meghan and Prince Harry on the front of it.

She also admires a piece of porcelain featuring the Cambridges that was taken for their family Christmas card.

This isnt the first time that Reese has expressed a love for the royals.

I love weddings !!This moment is everything

During Meghan and Harrys wedding in May last year, she was quick to tweet her adoration of the royal couple.

Sharing a video from their big day, Reese wrote: I love weddings!! This moment is everything.

The actress fell in love with the city after relocating there for several months while filming The Importance of Being Earnest in her 20s.

She said: I just love the city it is so beautiful it has the most gorgeous architecture, it has the best public park. Holland Park is my favourite public park.

In other royal news, we told you how Kate Middleton and Mary Berry are teaming up for a Christmas TV special.

Plus Meghan previously shared her favourite Thanksgiving recipes on The Tig – promising to make you feel like the Queen.

And Kate is a massive Strictly fan and gets Prince William watching too.

Boris Johnson could be off work at least a MONTH as experts warn PM’s...

Who is Mike Boateng? Winter Love Island contestant and police officer from London

Britain and Brussels warn of disagreement over crucial points that could sink deal after...