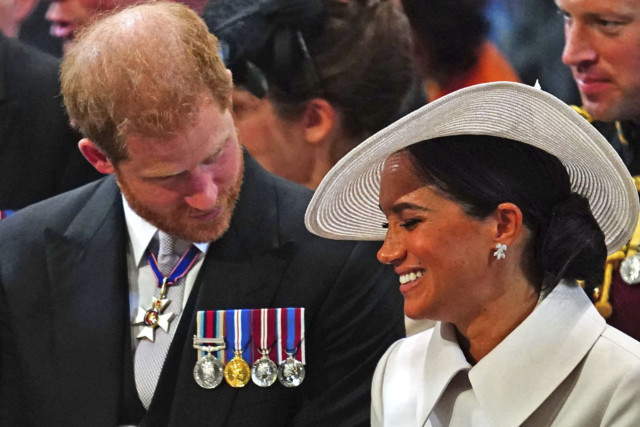 MEGHAN Markle and Prince Harry beamed as they reunited with the Royals for a special service at St Paul’s Cathedral – as the Queen watched on from home.

The US-based pair were seen laughing together as they took their seats in the second row in a nod to their place in the royal pecking order since they quit the Firm.

As the stellar service got underway amid four days of celebrations for the Queen‘s Platinum Jubilee, Meghan took the chance to comment.

According to lip-reading expert Juliet Sullivan, the Duchess of Sussex complimented the stunning cathedral as she and Harry spoke with the Archbishop on arrival, reports the Mail.

The pair then took their seats – with their place in the cathedral giving an insight into how their roles have changed.

Read more on the Jubilee Queen, 96, HAS met Lilibet as great-granddaughter turns one TODAY

While the Queen, 96, herself did not attend due to mobility issues, the rest of the Firm were there including Kate Middleton and Prince William, Charles and Camilla, Beatrice and Eugenie and Zara and Mike Tindall.

Prince William and Kate Middleton, 40, were spotted next to one another in the front row on the left.

Whereas Meghan Markle, 40, and Prince Harry sat on the opposite side, one row behind as the seating order is determined by working royal status – and Meg and Harry quit their duties in 2020.

The Duke and Duchess of Sussex also weren’t included in the procession into the Cathedral yesterday morning.

But the pair looked happy to be back on home turf as cheers when the “nervous” couple arrived hand-in-hand at St Paul’s to mark Her Majesty’s momentous 70-year reign.

They seemed at ease throughout the high-profile occasion – sharing smiles and jokes with family members and other attendees.

Yet Harry and Meghan made another sharp exit as they snubbed a family Jubilee event yesterday following the service.

The couple dashed from the ceremony rather than join other royals and VIPs at a reception.

They were whisked back to Windsor after keeping their distance from Wills and Kate, during the frosty service.

The monarch herself was not in attendance after experiencing “discomfort” during Thursday’s festivities, and she won’t be at today’s Epsom Derby due to her ongoing mobility issues.

It comes as HOAR revealed the Queen HAS met her great-granddaughter Lilibet before her birthday today.

Harry, 37, and Meghan, 40, travelled to UK with both three-year-old Archie and Lilibet, who turns one today, although neither have been seen.

The family-of-four have been staying at Frogmore Cottage which just is a ten-minute walk from the Queen’s private apartments at Windsor Castle. But the Queen, 96, has now been introduced to baby Lilibet Diana Mountbatten-Windsor – who was controversially named last June in her honour.

It is not clear when Lilibet met Lilibet but the Sussexes arrived at noon on Wednesday while the Queen was at her apartments ahead of the Platinum Jubilee celebrations kicking off. The Queen, 96, did not attend after experiencing some ‘discomfort’ during Thursday’s celebrations William and Kate sat on the left side of the cathedral, with Meghan and Harry on the right

From cats with fur balls to dogs with dry skin — your pet queries...

EastEnders spoilers: Tiffany Butcher gets a job in the funeral parlour giving makeovers to...