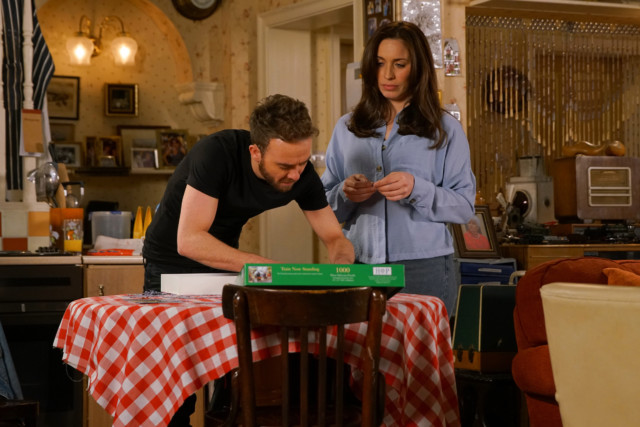 SHONA Ramsey asks David Platt to have sex with her to help her remember her relationship next week in Coronation Street.

Shona – who is played by Julia Goulding on the ITV soap – is currently suffering from memory loss. But will the couple get back together – or will Shona’s experiment only end in tears? Here’s everything you need to know…

Why does Shona ask David to have sex with her in Corrie?

Corrie fans know that Shona was caught in the firing line during the Christmas horror shooting, leaving her with brain damage and memory loss.

Having forgotten that her son Clayton was in prison for kidnapping her and stabbing Kylie Platt, she asked to go back to live with him.

She also refused to return home to her husband David who she now considers an enemy thanks to Clayton’s meddling.

But next week’s episodes of Corrie will see Shona start to warm to David as she moves into Roy’s flat.

And when she bumps into Gemma, she’s reminded of what a great relationship she had with David prior to the shooting.

Desperate to remember things, Shona invites David over later and suggests they have sex to help jog her memory. Corrie fans are hoping Shona and David will get back together

Will David and Shona get back together in Corrie?

Given that Shona is refusing to live with David and can’t remember anything about him, things aren’t looking so great for the couple.

But that hasn’t stopped fans hoping that Shona will fall in love with David all over again and move back in with him. One fan tweeted: “I miss the old Shona. It breaks my heart to see David the way he is now. It’s almost like he has a death wish. It’s quite sad.”

A third tweeted: “It will be ok David. Shona will be HOME! Soon.”

Julia Goulding hinted that there was hope for David and Shona while speaking on This Morning: “It’s a funny one with Clayton, she remembers him as 14.

“That’s when he started being nasty because of the influence from his father.

“His mask begins to slip again and those evil little ways show through. I think she’ll get wise to his games.” Priti Patel in fiery row as she STILL doesn’t know how many people are...