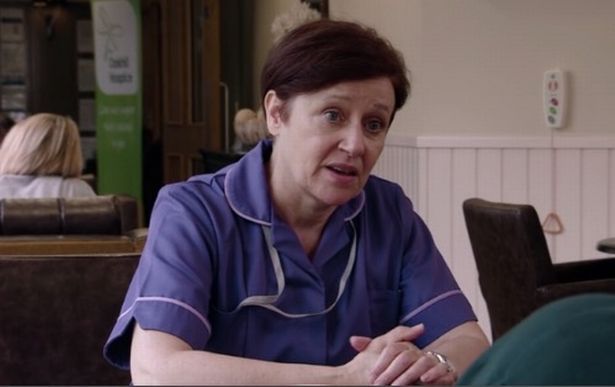 CORONATION Street has cast Brookside and Downton Abbey legend Helen Sheals in her THIRD role on the soap.

HOAR can reveal she will be back on screen from next week as Nina and Seb’s nurse.

She first graced the soap in 2009 as Lilly Richardson, the mother of Sophie Webster’s teen ex boyfriend Ben Richardson.

Then in 2019 she was praised for her portrayal of a hospice nurse who reached out to Sinead Tinker after she was told her cancer was terminal.

Newlywed Sinead received a warm welcome from the kindly nurse after being told she only had months to live.

Helen only appeared in a handful of episodes back then, but she is set to reprise the role of another nurse and will be in several scenes as hospital staff battle to save Nina and Seb, following the horrific injuries they are left with. Nina and Seb are left fighting for their lives after Kelly Neelan sparks a hate crime attack.

As Seb and Nina try to walk away, the gang run after them and end up viciously battering the pair.

Helen, who played Jan Murray on Channel 4 soap Brookside for almost two years in 1982, has recently been filming her scenes as the specialist nurse helps take care of the traumatised characters. The actress in Brookside as Jan

The big storyline kicks off next week, after soap boss Ian MacLeod previously revealed there will be a tragic social realism story involving Nina coming this spring.

Viewers will recognise Helen as her other TV credentials include roles on Casualty, Silent Witness, The Bill and Holby City.

The actor and theatre director, who played Judy Garland in JUDY! in the West End, was also a regular on now defunct Channel 5 soap opera Family Affairs.

Downton Abbey fans will remember her as having played two roles in the ITV period drama – as a postmistress and as Mrs. Wigan.

Helen has also starred in Last Tango in Halifax and Doctors.

Rita Ora slammed for using a dog with cropped ears in new video as...

The cringeworthy dance moves of political leaders, from the ‘Maybot’ to Jeremy Corbyn’s clapping...