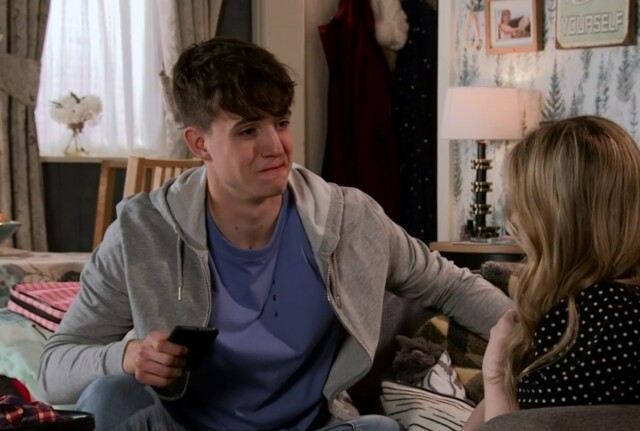 CORONATION Street fans are in shock after Aaron revealed the truth about his injuries.

The trainee mechanic has been appearing on the cobbles for weeks with unexplained injuries leaving his girlfriend Summer Spellman confused.

Aaron opened up to Summer tonight in Coronation Street

But tonight having spotted her boyfriend in the street, she realised he had blood all over his face but he ran off and later turned up at her flat.

“Who’s doing this to you? Who’s hurting you?” she asked.

“Sometimes he just loses it,” he explained.

“He’s had a hell of a lot to deal with. It doesn’t even happen that often. You can’t tell anyone. Summer, you’ve got to keep this between us.”

But as Summer tried to get him to see sense, Aaron defended his abuser saying: “It’s not his fault – he’s sick.

“He’s an alcoholic and he really tries hard to stay on the wagon but when he falls off… He’s an addict. That’s an illness like any other.”

He added: “It’s not that bad, usually we get along great. My dad’s got no-one. And since my mum left he’s got this thing about disloyalty.

“If he even thought I’d told anyone about this then… He’s just going through a rough patch at the moment.

“He’ll soon straighten his head out and this’ll all be fine. I promise.”

But Summer was terrified for him – and so were viewers.

One wrote: “Aaron’s dad is an alcoholic

A second said: “Aaron is getting abused by his dad

Another added: “Aaron being beaten up by his dad