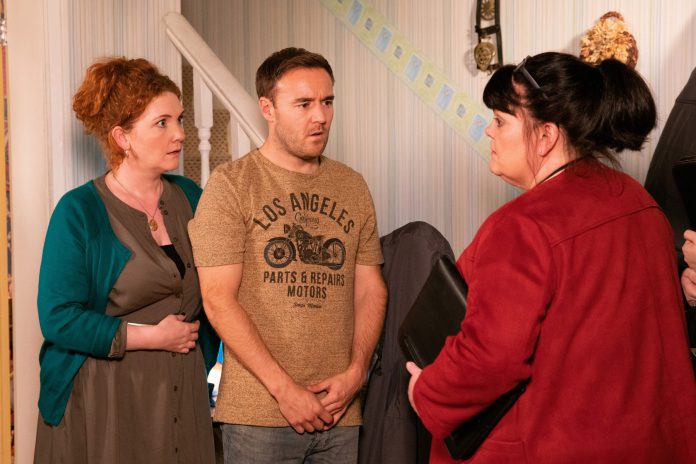 CORONATION Street’s Fiz and Tyrone will be left devastated as Hope and Ruby are taken away by social services in the New Year.

The girls will be taken into foster care as the manipulative nanny Jade continues to plot the family’s destruction – and attempt to gain custody of the children.

The troubled youngster will claim Ruby pushed off a bench before it’s revealed she trapped it in a door.

It’s at odds with Fiz’s explanation, and when Hope confirms allegations made against her mum and Tyrone, social services are forced to investigate.

Ruby and Hope end up staying with neighbour Kevin Webster, but sneak to see their mum who greets them with a tearful hug.

Things get worse for Fiz when social services reveal the girls will be taken into care permanently.

She’s told a half-sister has come forward to look after them – none other than Jade, who Fiz finally discovers his her killer ex’s daughter.

Will they be able to prove their innocence and expose Jade’s cunning plan before it’s too late?

Fans had been wary of the teaching assistant since day one and their suspicions were confirmed last month when it was revealed that Jade is serial killer John Stape’s daughter.

The teaching assistant worked with Fiz and Tyrone’s daughter Hope at a specialist school in Birmingham before moving to Weatherfield to continue to school her.

Corrie fans were alerted to Jade’s suspicious antics when she was caught rifling through drawers in the house by Evelyn.

And in a disturbing scene, Jade added red curly hair to a picture Hope had drawn of someone pretending to be dead – much resembling Fiz.

After her string of suspicious antics, fans were convinced that shes secretly a murderer related to the cobbles villain John and they were right.

Viewers watched in horror at the end of last month as Jade read an emotional eulogy in front of a gravestone which was shown to belong to John Stape.

John is one of Fizs former lovers who kidnapped and tormented women on the cobbles and murdered Joy Fishwick and Charlotte Hoyle.

He is also Hope’s father.

And in an upcoming episode, Jade’s plans for revenge are set to come to a head as Fiz and Tyrone invite her for Christmas.

When the evil nanny gives Hope a hug and promises to look after her, Evelyn watches on with suspicion.

Doctor MP warns it’s DAYS before they have to make life-or-death decisions and are...

Cineworld confirms plans to temporarily close all 128 of its UK cinemas because of...

Son of a veteran who killed himself after suffering PTSD raises thousands selling homemade...