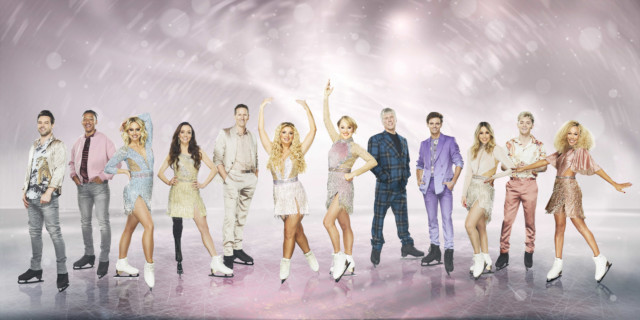 TWELVE new celebrities swap their shoes for ice skates as they take part in the Dancing on Ice 2022 competition.

Taking to the ice this year includes a Coronation Street actress, a former Pussycat Doll member, a Paralympian, and a rugby player. Meet the celebrities and their professional partners.

Who are the Dancing on Ice pairings?

She is best known for being a former member of the Pussycat Dolls.

In 2009, she became a judge on the Sky1 dance competition show Got to Dance, appearing until 2014.

Kimberly will be partnered with Mark Hanretty, a 36-year-old Scottish former competitive ice dancer who represented the United Kingdom with Christina Chitwood.

In 2021, he was paired with Billie Shepherd, however, they had to withdraw from the competition in Week four, due to Billie sustaining a head injury during training. Connor Ball is a 25-year-old who is best known for being the bassist of the British band, The Vamps, along with Bradley Simpson, James McVey, and Tristan Evans.

During his announcement of joining the Dancing on Ice competition, he said that he was “excited and nervous” to be taking part, but warned that he was “quite clumsy and accident prone”.

Joining Connor on the ice is Alexandra Schauman, a 41-year-old professional dancer from Finland.

She originally was part of the Finnish version of Dancing on Ice, and in 2008, she came second place in the competition with her celebrity partner, footballer Jesper Blomqvist. He made the announcement of joining the show during an appearance on ITV’s Loose Women, telling the panellists: ““I’m so, so excited. It’s been a while coming now. I’ve known I’d be doing the show for quite some time and I want to get started, I’m so excited to be on the show.”

Brendon will be skating his way on stage with Vanessa Bauer, a 24-year-old professional skater who was born in Berlin, Germany in 1996.

She started skating from a young age, becoming the junior pairs champion at the 2013 German Figure Skating Championships. Regan Gascoigne is a 25-year-old dancer.

He is the son of English footballer Paul Gascoigne.

Although Regan is a trained dancer, he is still nervous about the ice, saying ahead of his debut: “Obviously I dance and love dancing but it’s the skill of this. I’ve always wanted to do it. Always! Ever since I was a kid!”

She first appeared on Dancing on Ice in 2021, where she was partnered with Graham Bell. Speaking of her new signing, she said: “I ice skate as a hobby sometimes so I can get around the rink but I can’t do any tricks, no pirouetting or anything so I’m really looking forward to pushing myself and learning as much as I possibly can. Not just skating around the ice but actually dancing on ice. Bring it on!

He joined Dancing on Ice in 2021 and was paired up with gymnastic medalist Amy Tinkler. Stef Reid and Any Buchanan Dancing on Ice 2022

Stef Reid is a 36-year-old track and field Paralympian.

He began figure skating at just seven-years-old, and since turning professional in 1999, he has played various leading roles for Disney on Ice, including Scar, Simba, Tarzan and Aladdin. He announced the news of him joining Dancing In Ice to This Morning presenters Holly Willoughby and Phillip Schofield, by saying: “At the moment it’s more like Bambi on Ice, not Dancing On Ice. How I got picked I don’t know because I was absolutely awful at the audition but they must have seen some potential in me!”

“I’m looking forward to learning a new skill and I can’t wait for the Christmas ice rinks again and I can get on there and really show off,” he said.

Bez will be dancing the night away with 34-year-old professional dancer Angela Egan. Sally Dynevor is a 58-year-old actress best known for her appearances in Coronation Street.

The news was revealed on ITV’s Lorraine, where she said: “This is a massive challenge, Lorraine. It really, really is. I’m not getting any younger, I’ve just got to take every opportunity I get so that when I’m old I can say you know what? I gave it a go.”

When asked if she had ever skated before, she replied saying:  “No never! I went with Hattie [her daughter] when she was little and I had a penguin and then thought this is too hard so I’ll go and get a coffee!”

Professional dancer, Matt Evers will be partnering with Sally.

He was partnered with Ian “H” Watkins in 2020 and the two became the first same-sex couple to feature on the show. Ben Foden is a 36-year-old English rugby player, who will be ditching the field for some skates.

During his announcement reveal, he said: “I used to skate a little when I was a kid. I’d go to ice discos when I was 15, 16 years old and you’d always see these kids that could do pirouettes that had a proper dancing background. I like the idea of learning a new sport and a new skill,”

“I’m quite competitive as well so I like the challenge of competing against others doing something that I’m not necessarily good at!” During the news of her new signing, she said: “It now feels really real, this is really happening. I’m so excited, obviously really nervous. It’s one of those things, until you do it you don’t know what’s going to happen”. She has been reporting on This Morning’s Sofa Tour since 2018 and has been the entertainment editor on Lorraine since January 2020.

The news was announced on ITV’s Lorraine, with Hebden saying: “It’ll be fun. This is one of ITV’s most sparkly shows so when they asked me I was like, ‘Absolutely!’. We watch it at home. It will be brilliant to learn a new scary skill.”

The 41-year-old , first appeared on Dancing On Ice in series six in 2011, partnered with Frank Lampard. He gained himself a silver medal at the 2020 Summer Olympics.

During the announcement of his signing, he said that he was ”feeling good”.

When asked if he’s ever skated he said: “I have [rollerskated] when I was younger so we’ll see how it goes.”

Did you miss our previous article…
https://www.hellofaread.com/soap-opera/who-dies-on-hollyoaks-this-week/

‘Health passports’ developed for phones could allow vaccinated Brits back to pubs, restaurants and...

Im A Celebrity 2019 catch up: What happened in the jungle last night?

BGT 2020 judges: Who is on Britain’s Got Talent panel this year?