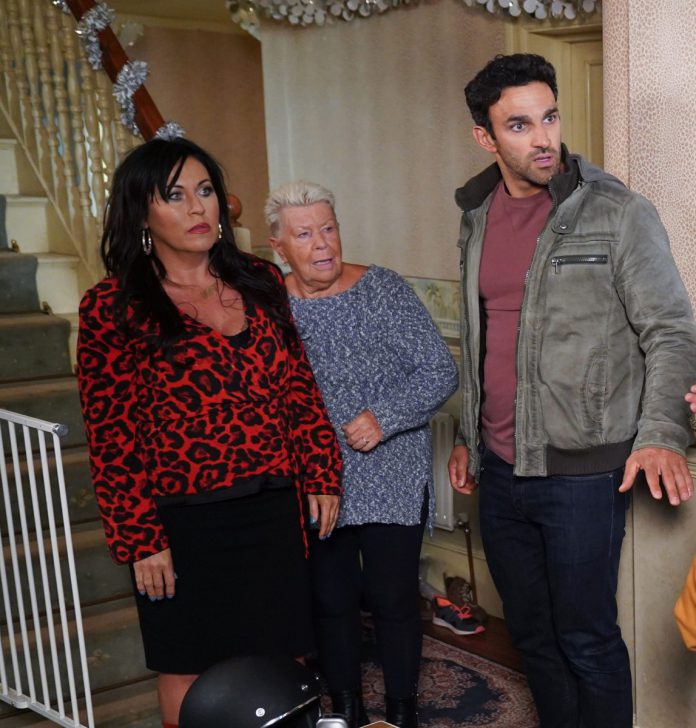 EASTENDERS boss Jon Sen has cryptically revealed a “guardian angel” will return to the Square to pay the Slaters a visit.

With all hell breaking loose in Walford over the festive period, Sen has now hinted at what fans of the soap can expect going into 2020.

Speaking to Digital Spy, he said: “We have a stranger returning to the Slaters as their guardian angel, and we have the next chapter of the Whitney/Leo story, because Whitney felt that Leo was done and dusted but as we will discover that ain’t so.

“Chantelle’s growing awareness of her situation, and questioning whether Gray will ever change.”

He added that he was also hard at work on the show’s 35th anniversary but kept all details secret.

Viewers have been speculating at who the guardian angel might be with numerous names being thrown into the mix.

It was a merry Christmas for the Slaters

Many believe it will be Daniel Cook after it was revealed he is in fact still alive and faked his death to protect Jean Slater.

Earlier this month viewers were in shock after it emerged Daniel was actually alive.

After receiving the news he died of his cancer, Jean (Gillian Wright) attended a memorial service alongside Kush Kazemi (Davood Ghadami).

However, in a shock twist Daniel (Adrian Edmondson) was revealed to be alive.

As an emotional Jean mourned her friend and thanked Kush for coming with her, Mike – Daniel’s neighbour – met Daniel atop the Prince Albert.

It turns out he faked his death because he’s fallen for Jean and didn’t want her – if she fell for him – to see him in the final stages of his illness.

Fans were more than a bit surprised when it was revealed Daniel wasn’t dead.

One person wrote: “Daniel faking his own death nothing short of iconic. He scammed us all #EastEnders”

Another added: “Daniel’s still alive (For now) seriously? Kinda cruel to make poor Jean grieve for him ahead of time though ain’t it? Even if he did it for noble reasons #EastEnders”.

A third added: “Awww poor Jean. She is going to be heartbroken all over again when she finds out what daniel has done. @bbceastenders #EastEnders”

Jean became friends with Daniel when the two bonded over their cancer treatments in hospital.