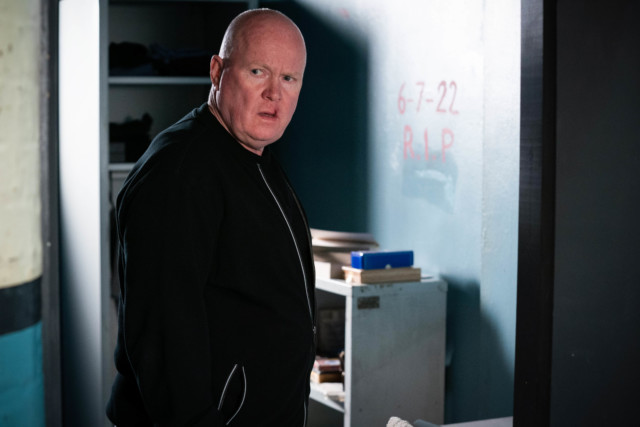 EASTENDERS fans are in shock after Phil Mitchell was given a death threat tonight.

The Walford hardman – who is played by actor Steve McFadden in the BBC soap – was warned he will die this week unless he takes DCI Keeble’s deal to become a police informant.

Phil was in the middle of a desperate call to Kat Slater for help when he was attacked by another lag.

After taking enough nonsense from the bolshy prisoner, Phil snapped when he grabbed the phone and cut him off from his call to Kat.

Storming outside, Phil confronted the thug and finally unleashed on him.

“Give me the phone,” he screamed at him.

And when the thug didn’t – Phil decided to use the old fashioned Mitchell way.

He attacked the man with the help of Ravi – but things soon went wrong as others joined in.

Phil was left beaten and bloodied on the floor by the thugs before the wardens stepped in and took him away.

And afterwards Phil was in for a shock when he was summoned to meet with DCI Keeble again.

She handed over a burner phone for Phil and made him an offer.

“You’ve gone to a lot of trouble to get that from what I’m hearing,” she said.

“Not to mention upsetting a lot of people along the way. It wasn’t very bright Phil, making enemies like that, not in here.”

She told Phil how his life was in danger from those enemies – but that she had a way out for him.

“Press three,” she said pointing to the phone.

“It’s a pre-programmed text, anytime before 6pm on Wednesday. You press that and those guards won’t go away.

Phil was left in shock by Keeble’s offer and so were fans.

One wrote: “Is DS Keeble genuinely trying to threaten Phil Mitchell of all people? Either he agrees to turn grass for her or she just stands by & let’s him potentially be brutally murdered inside really?”

A second said: “I think Phil will take the deal but will fake his own death for his safety.”

Another added: “She is right Phil choose Body bag or grass grass greener & you will live.”

Did you miss our previous article…
https://www.hellofaread.com/soap-opera/mel-b-bravely-speaks-out-in-moving-video-as-she-launches-womens-aid-campaign-to-end-domestic-abuse/

Chancellor Rishi Sunak to pump in billions of pounds to prevent ‘jobpocalypse’ for young...

Only one in ten stay at home for two weeks when told to self-isolate,...