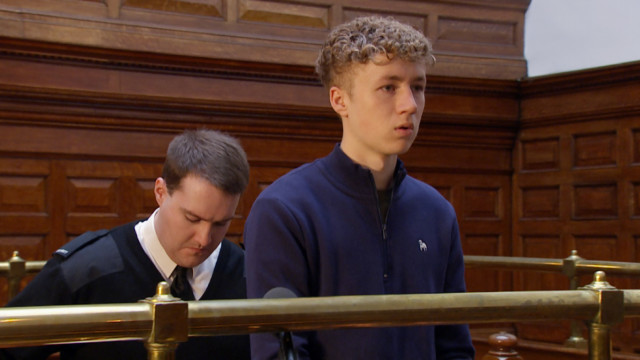 EMMERDALE has delivered a shock for fans after a villain left the village tonight.

Noah Dingle fled ahead of his court sentencing after pleading guilty for stalking ex Chloe Harris.

The court officer told him: “Noah Dingle you are charged with the harassment of Miss Chloe Harris under section 2a of the protection from harassment act of 1997.

Noah replied with “guilty” but then quickly changed his mind and told the court: “Actually sorry, I meant not guilty.”

He even sniped back at the judge, insisting the Government was to blame before being shut up. After the judge told him to take the court seriously, he changed his mind back to guilty before being shocked that the court will decide his fate within a week.

The creep later seemed to take it all in after his niece Sarah told him to get a grip.

He visited Chloe and apologised, properly this time.

Noah told her to write her victim impact statement from the heart and slag him off to high heaven – and not to worry about what it would mean for his trial.

Returning home Noah was even nice to his mum and joked about going to prison.

She told him how proud she was of him and he went out, claiming he was meeting Samson.

However once outside his true plan was revealed.

Grabbing his bag from the bin, Noah left the village – running away from the court sentencing and his life.

Fans were shocked at him quitting the village.

One wrote: “Now where is Noah going? Is he going to see Debbie in Scotland…. does Cain have something to do with this plan?” what’s the fuzz about?

I’m a skin expert, you should shave your face each day A second said: “See ya later Noah! You’ll get as far the bus station bab”

Another added: “As if no one sees him walking with the bag”

I’m a lottery expert – the best numbers to win and why you should...

McDonald’s explains new restaurant rules when it opens for takeaway at the end of...

EastEnders Gillian Taylforth looks worlds away from Kathy Beale as she steals the show...