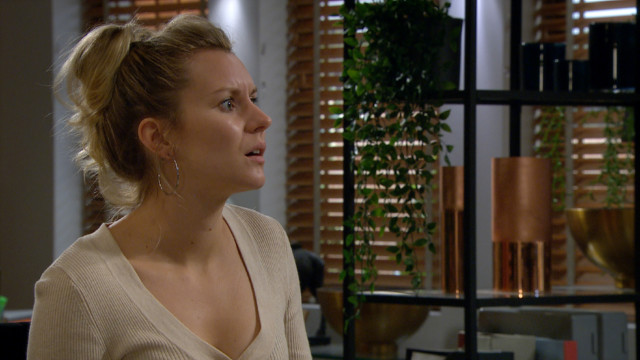 DAWN Taylor will be arrested next week in Emmerdale after attacking newcomer Meena for flirting with her ex Billy Fletcher.

The killer will fly at Meena this week in the ITV soap after she was forced to dump Billy to protect him from the ongoing saga surrounding Malone’s murder.

Dawn feels awful when Billy says he still loves her

Viewers know that Dawn was plagued by guilt after killing Malone in self-defence when he tried to force her to overdose on heroin.

But Harriet kept Dawn calm and decided that they were going to bury the detective in the church graveyard and pretend that he had gone on the run.

Everything was going smoothly until Dawn broke and spilled the beans about the murder to her dad Will, causing him to dump Harriet. Billy tries to get the truth out of Dawn

Dawn then realised she had to ditch Billy, who she still loves, to protect him from getting hurt.

But next week’s episodes of Emmerdale will see Dawn break down when Billy says he’s still in love with her.

When Billy demands an answer to why she dumped him, Dawn fights back tears. Dawn is arrested for attacking Meena

But they’re stopped in their tracks when a police officer arrives and arrests Dawn on suspicion of attacking Meena.

Will Dawn come clean and explain what’s happening to Billy?

Emmerdale have teased that newcomer Meena, who is Manpreet’s sister, is going to bring a closet full of skeletons with her upon her arrival in the village.

Will Meena drive a wedge between Dawn and Billy?

“Meena is such a fun and complex character to play and I’m really looking forward to seeing how people react to her,” Paige Sandhu – who will debut as Meena – recently explained.

“I’m loving working with both Rebecca and Bhasker and they have made me feel so welcome.”

Channel 4 slammed as it shows Couples Come Dine With Me and Flog It...