THERE’S nothing quite like a soap wedding, but an Emmerdale wedding, during Super Soap Week, on the 50th anniversary of the show launching? All bets are off.

But it seems that, while we know some of the characters on the show don’t emerge unscathed, the actors were feeling some heat too – in fact, Claire King, who plays bride-to-be Kim Tate, was left with a nasty injury to remind her of the big event.

Claire King revealed a nasty reaction to filming on her horse

Kim Tate is never one for the subtle and understated

Claire has been playing beloved ‘superbitch’ Kim on and off for the past 32 years, making her one of the defining residents of the Dales village. She’s now preparing to marry Will Taylor (Dean Andrews) and as you can imagine, the millionaire business mogul is making sure to go all out.

We’re talking coming in on a horse in a bright red coat and tails – because understated is lost on this Emmerdale Queen.

But the look, and the subsequent drama of the event, came at a cost that’s a little bit stomach-turning.

Speaking ahead of the 50th anniversary special, Claire explained: “There was a lot of riding, jumping through woods with giant wind machines blowing and a few stunts with the horse.”

However, she didn’t leave the set without sustaining an injury.

“A week or two afterwards, I had this swelling in my nose and then it puffed up under my eye. I got my doctor to give me some antibiotics because I thought I had gotten some sort of infection.

“But then the weekend after, I blew my nose and out came a seed pod! I think it must have gotten lodged in from when we were doing all the woods stuff because there’s so much dirt, leaves, dust and soil.

“It must have blown up with all these wind machines and I was not protecting my nose or anything, which you wouldn’t even think about.

“It must have got lodged there, stuck there for a week and turned septic.”

Yowch. Thankfully she’s been able to recover in the week’s since!

But when it comes to the 50th anniversary, there is definitely a storm brewing – literally in this case  – and it promises to change Emmerdale as we know it.

Will she be able to spend at least one day of happiness with husband number four before her world falls apart? 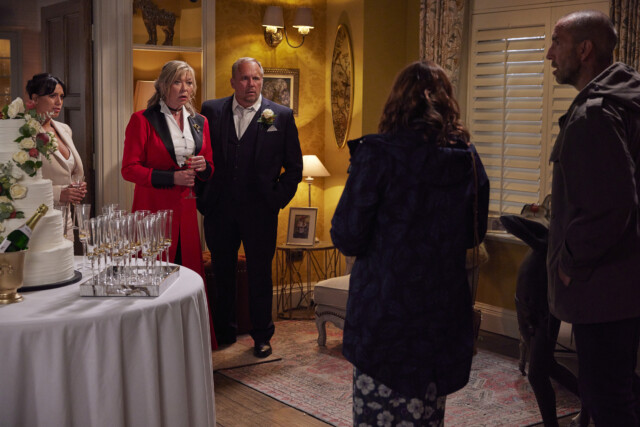 Where’s the fun in a wedding going ahead as planned anyway?

Love Island shock as Shaughna admits shes got feelings for Luke M after...