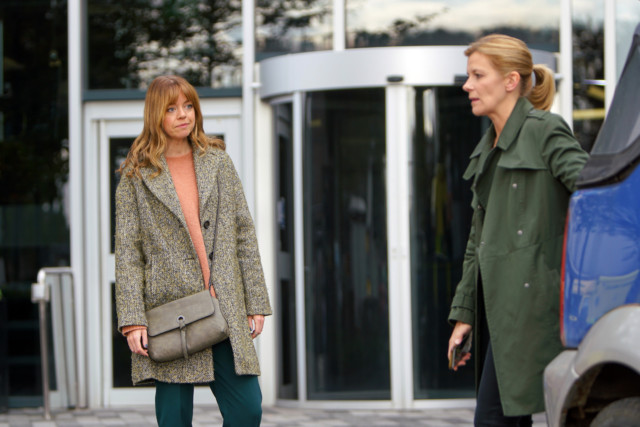 LEANNE Battersby agrees to let her son Oliver go next week in Coronation Street and makes arrangements for his life support to be switched off.

Leanne continues to despair over the court ruling that Oliver’s life support should be turned off and tries to get Steve to support her appeal to save their son.

Imran is lost for words when Leanne adds that she wants to sue the hospital for negligence and breaks the news to her that he and Elliot are no longer prepared to represent her.

When Toyah tells Leanne that Imran found it really heard to reach his decision, Leanne accuses her of betraying her own sister. Leanne barricades herself in Imran’s office

Later in the week, Dr Howarth tells Steve and Leanne they’re running some blood tests and are concerned about Oliver’s liver function.

Leanne pushes her way into Imran’s office and begs him to help her with the case.

When Imran refuses, Leanne knocks over a filing cabinet and locks them in the room. It’s not long before Nick and Toyah arrive having been summoned by Imran, and beg Leanne to open the door.

Imran drags the cabinet out of the way and opens the door and Steve gently begs Leanne to let Oliver die. Oliver dies surrounded by his family

Leanne and Steve then prepare to say goodbye to their son, with Leanne insisting she needs to go home to get Oliver’s favourite pyjamas.

Later, viewers will see Steve and Leanne sitting at Oliver’s bedside singing ‘You are my Sunshine’.

As the singing stops, it’s clear Oliver has died. The reality of his situation dawns on Geoff when Tim announces that he’s agreed to stand as a witness for the defence in Yasmeen’s trial.

Later, Ray calls at Speed Daal and offers to take No.6 out of Geoff’s hands at a knockdown price.

Geoff is tempted by Ray’s offer and later reveals to Alya that he’s changed his mind – he’s selling the house and moving to Cyprus. Alya discovers Geoff has been making trips to Oldham

When Ryan tells Alya that, according to the satnav in the van, Geoff has been going to Oldham, Alya wonders whether it could have something to do with Elaine’s disappearance, and calls at Tim and Sally’s to share her fears.

When Geoff heads out, Tim and Sally search his house for an address in Oldham, but they’re interrupted as he arrives back and orders them to leave.

Will Alya track down Elaine’s whereabouts? Johnny tells her that seeing alcoholic Peter suffer a relapse has reminded him of the suffering he caused Grant, the security guard that drank himself to death after Johnny and Scott’s botched robbery years ago.

Jenny tells Johnny he should try and move on.

But later, Carla finds Jenny in tears and quizzes her about what’s going on.

When Jenny tells her everything about Johnny’s past, Carla goes to talk to Johnny, telling him they’ve both done things they regret. Later, Margaret calls at the Rovers and tells Jenny she’s the mother of the security guard who was injured in the hit and run.

A horrified Johnny emerges and confesses he was responsible for her son’s death.

Jenny begs Margaret not to go to the police and tells her he suffers from MS, but Margaret storms off without reassuring Jenny. Later, Jenny tells Johnny that her step-daughter Daisy has called and she and her boyfriend are visiting for lunch.

But Johnny, battling a guilty conscience and convinced the police are coming for him, announces he wants a divorce.

When the lunch still goes ahead, Johnny does his best to sabotage it, telling Daisy about Aidan’s death and his affair with Liz. Johnny is arrested on suspicion of burglary and GBH

Later, Jenny ignores Johnny and insists that Daisy and Lee stay for dinner.

But Johnny can’t take it anymore and starts a raging row with Jenny.

They’re interrupted, however, when a police officer arrives and arrests him on suspicion of burglary and GBH.

Could Johnny be looking at prison time?

Rita Ora loses over 300,000 followers as furious fans unfollow her after lockdown rule...

Coronation Street horror as Gemma Winter MURDERS her babies by pushing them under a...