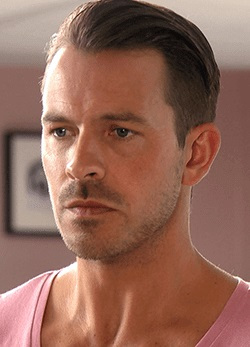 DARREN Osborne faces a huge decision next week in Hollyoaks when Nancy urges him to open up to Mandy about the extent of his depression battle.

Nancy urges Darren to open up

1. Nancy urges Darren to open up after Kyle’s funeral

Everyone tries to support Nancy as the day of Kyle’s funeral arrives.

When Brooke bails on reading her tribute for Kyle during the wake, Nancy agrees to take over from her.

Nancy is struck to see that Brooke’s tribute is about honesty and as she reads it out and urges anyone who is keeping a secret to open up to somebody, she looks directly at Darren.

Darren recently confided in Nancy and revealed he’d tried to take his own life earlier this year.

Can Nancy convince Darren to open up to Mandy about the extent of his depression? Warren continues to stew over Felix after confiding in Sienna, Brody and Liberty about how Felix used to bully him when they were living in the same children’s home.

Later, it all kicks off when Warren breaks into Toby and Celeste’s flat to get revenge on Felix.

What’s he got in store for his former tormentor? 3. Scott reflects on his mental health

Scott returns to the village and is saddened to hear about Kyle’s suicide and funeral.

The shock prompts Scott to reflect on his own mental health struggles and discuss how he’s now happy in his relationship with Mitchell. Lisa bags a new job at The Loft in Hollyoaks

Lisa is thrilled when Grace offers her a new job at The Loft, and the pair crack open a bottle of champagne to celebrate.

But with an exit on the horizon for Lisa, could her new career path ultimately lead to her departure? Warren meets up with Cormac in Hollyoaks

5. Warren gets another blast from the past

Warren meets up with Cormac – his carer at the children’s home – and tells him that Felix has been making allegations against him.

A defensive Cormac insists that Felix is telling lies. 6. Mitchell worries about his wedding

Felix books a wedding venue for Scott and Mitchell and secures a date the following week.

But Mitchell worries about Walter refusing to come to the ceremony.

Later, Mitchell and Scott hatch a plan to trick Walter into attending. Darren reaches out to his therapist next week in Hollyoaks

Darren is annoyed when Mandy asks Cindy to look after Ella after assuming he’s not up to the job.

Later, Darren video calls his therapist and explains his irritation at everyone treating him differently now that they know he’s got depression.

Goldie starts to worry that her style is at odds with her relationship with Joel.

She decides to do a makeover to make her look more like a ‘vicar’s wife’.

But could her plans be a recipe for disaster?

EastEnders reunion as Jake Wood poses for a snap with Rita Simons a week...

Is Wilko open today and will it stay open in the second lockdown?