NEWS of Amelia Spencer’s pregnancy came as a shock to many viewers and the teen herself.

Emmerdale fans have since been scratching their heads, wondering who the father could be. Here are villagers who could fit the bill.

Amelia Spencer recently found out she was pregnant

As ITV viewers know, the youngster portrayed by Daisy Campbell has only dropped subtle clues about the father’s identity.

But when it emerged that she was around 21 weeks along, soap fans immediately worked out she must have slept with somebody in March, 2022.

This led to him turning to a vulnerable and love-struck Amelia.

At the time, Noah planned on getting the 15-year-old drunk before taking advantage of her during a party at the Café.

He was then sent to prison for stalking and terrorising Chloe after being caught by his mother Charity (Emma Atkins).

Amelia collapsed in Home Farm, endangering baby Thomas Tate, and found out she was pregnant while he was behind bars.

When she was spotted at the abortion clinic by Charity, the Woolpack landlady jumped to conclusions and speculated Noah was the father of Amelia’s secret baby.

Viewers agreed with her but were shocked to find out Noah and Amelia have actually never been intimate.

Noah’s name was cleared upon his return to the Dales, reducing the probability he’s the father to 0%.

This hasn’t stopped him from being a friend to Amelia as he gave her some valuable piece of advice when it came down to what she wanted to do about her pregnancy. 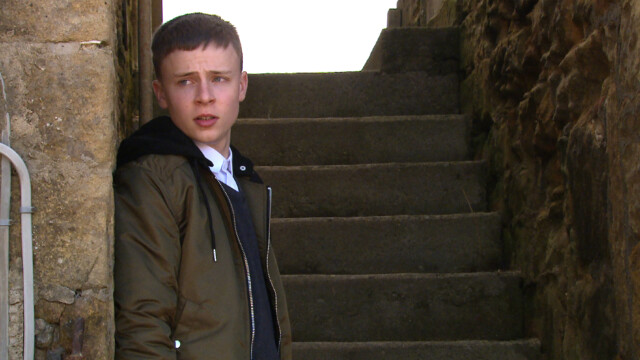 Samson was another Dingle to be thrown into the mix

While Noah was the first guess for many viewers, others threw another Dingle into the mix, thinking the rebellious youngster would be too obvious of an option.

In recent months, Samson has tried to turn his friendship with Amelia into a more romantic connection.

This has been a challenge, however, as the young girl only had eyes for Noah – or so it seemed.

When she was questioned about the father of her baby while at the abortion clinic, Amelia told a nurse he was a “teenager” just like her.

Later on, she told Charity Dingle the father was “someone from church” but she could still be lying.

As they tried to figure out who it could be, fans believed Samson to be another potential baby daddy.

Samson’s name hasn’t been ruled out as of yet but some viewers remain sceptical.

“Don’t think it’s Samson as I don’t think he’d be the type to sleep with a girl and then just not speak to her for ages”, one of them wrote on Reddit. 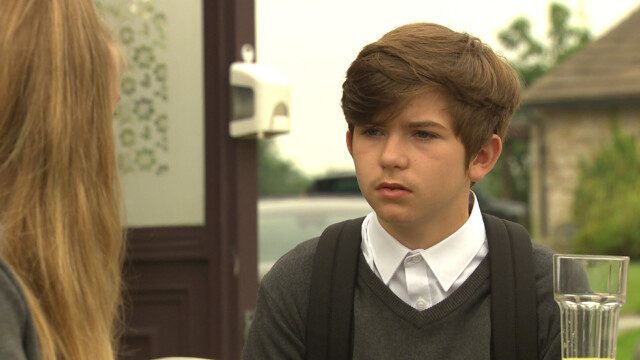 Heath Hope hasn’t been seen on screens for a while

Although he hasn’t recently been seen on screens, Heath Hope is another name that has crossed the minds of many soap fans.

The only argument that could support this theory is Amelia’s close friendship with Heath’s twin sister Cathy (Gabrielle Dowling, Sebastian’s real-life sibling).

According to viewers, Amelia could have become close to Heath as her bond with Cathy evolved.

Cathy is one of the only villagers Amelia has been close to as she’s struggled to form friendships with residents her age.

And with Heath’s apparent absence from the Dales, his involvement in Amelia’s pregnancy could be a twist viewers would not expect.

But could writers be two steps ahead of them? 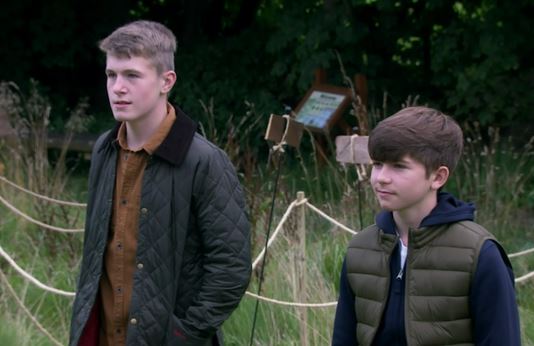 Arthur Thomas (left) will be 15 in August

Much like Heath, the son of Laurel and Ashley Thomas has been standing on the side-lines and away from the spotlight as drama continues to unfold in the village.

However, viewers have swarmed over to social media to question whether he could be the father of Amelia’s baby.

One argument mentioned in his favour is his age, as he’ll be celebrating his 15th birthday on August 26.

Some fans have theorised the baby storyline may be a good excuse for him to come out of the woodwork.

But what if Amelia had spent the night with someone much older than her? 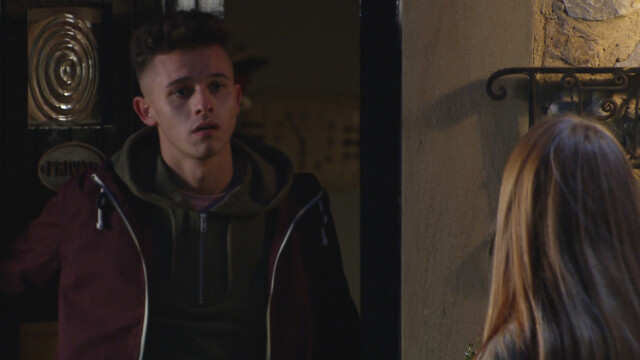 Could Jacob be the father?

Like any other teenaged lad in Yorkshire, Jacob Gallagher is also a suspect.

Jacob’s name was added to the list as it’s thought Amelia could have gone to him for comfort after Noah was horrible to her.

The pair haven’t been seen together, which could lead to another surprising reveal.

However, Jacob is known to have had a fling with Chloe Harris – which led to Noah’s jealousy in the first place – as he continued to mourn the loss of his late girlfriend Leanna Cavanagh.

Could he also have spent the night with Amelia to take his mind off of her?

The 19-year-old is trying to figure out what he wants to do with his life.

But could fatherhood thwart his plans? 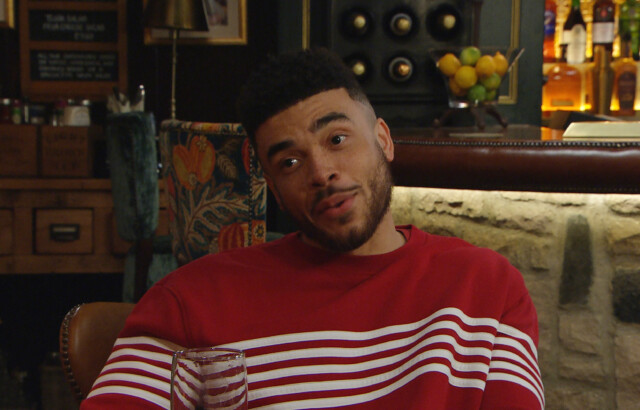 The farm hand became another suspect after Emmerdale quashed all speculation around Noah Dingle and he hasn’t been seen with Amelia on screens at all.

With the potential surprise from the reveal playing in his favour, some viewers believe he could be the father as he has already shown he’s not against flings with younger residents.

In a shocking twist, and as she tried to get away from Noah, Chloe also bedded Nate. 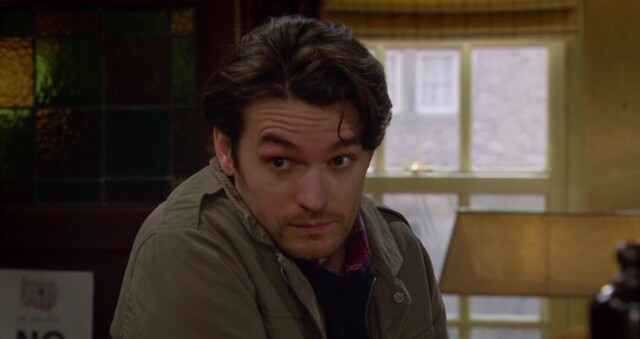 Mackenzie is already expecting a baby with Charity Dingle

According to another theory, Mackenzie Boyd could also have a link to Amelia’s pregnancy.

The heartthrob is expecting a baby with Charity, as it was revealed to him in recent scenes of the Yorkshire-based soap.

Could he have ANOTHER baby on the way as the storyline is set to include many twists and turns?

If Mackenzie did father Amelia’s baby, this would mean he broke the law due to their age gap and the teen being under the legal age of consent.

While he’s on better terms with Charity, Mack hasn’t always been happy with her and has felt neglected in the past.

As the landlady focused on the Woolpack, her new business venture, fans believe Mackenzie may have tried to comfort Amelia after Noah’s outburst against her.

Knowing he had done something illegal, he could have then sworn Amelia to secrecy, not connecting the dots when he found out she was pregnant.

However, another darker theory made its way to social media. 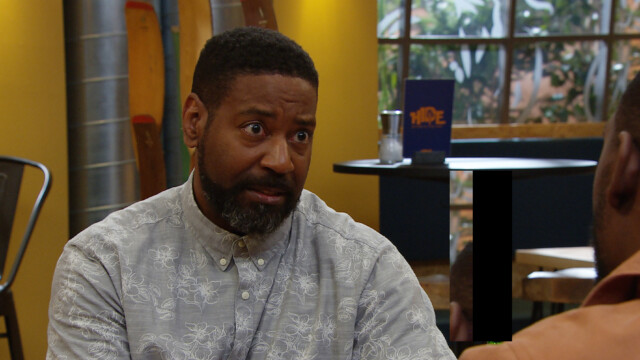 Not many soap fans have spoken about Emmerdale vicar Charles Anderson but the theory appeared online.

While she struggled to make friends in the Dales, Amelia turned to the local church, where she was welcomed by Charles.

The pair formed a bond as the vicar looked out for the young girl in a fatherly manner.

But could he have had a more sinister motive?

“I’ve seen theories that it’s Charles and they’re doing some sort of child abuse storyline”, one fan commented on Reddit.

They added: “I struggle to believe this though and will be devastated if they ruin Charles’ character.”

If Charles was to be revealed as the father of Amelia’s baby, the element of surprise would definitely be there.

Yet, he’s already involved in a storyline focusing on his long-lost daughter Naomi.

But could writers really ruin what seemed to be a wholesome friendship?

Soap bosses have teased another baby would be born by the end of the year, ahead, after or even on the soap’s 50th anniversary in October, 2022.

Will Amelia reveal the identity of her baby’s father before her water breaks?

Tune in to ITV to find out.

Did you miss our previous article…
https://hellofaread.com/soap-opera/coronation-street-spoilers-audrey-roberts-hides-mental-health-torment-from-her-family-after-suicide-bid/