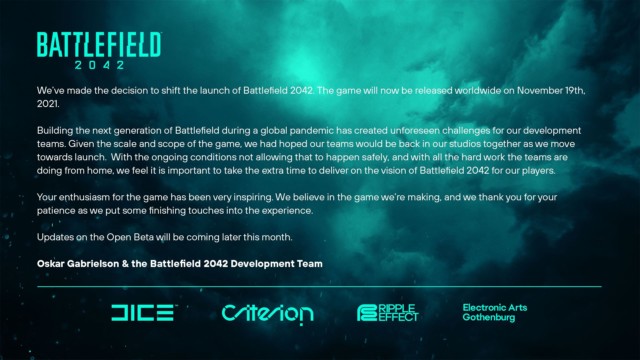 BATTLEFIELD 2042 has been delayed – it’s official. But the silver lining is that the beta dates have leaked.

The game’s official Twitter account broke the news yesterday, announcing that the title will no longer be hitting its October 22 launch date.

Instead, Battlefield 2042 will now be releasing a month later, on November 19.

Earlier this year, EA had said that DICE was “way ahead” of schedule with the game (via VGC)

But the company was apparently jumping the gun, with the challenges of the pandemic cited as the reason for the delay.

Call of Duty: Vanguard will now hit the shelves ahead of the new Battlefield game, with it November 15 release.

In the midst of all this, reputed CoD and Battlefield leaker, Tom Henderson, has dropped the dates for the Battlefield beta.

Gamers hoping to get some hands-on time with the game can at least look forward to the beta next month.

So if you want to dive in on Wednesday, October 6, you’ll have to take that into account.

Otherwise, you can wait until the open beta weekend, although you’ll have less time to play.

The Battlefield 2042 beta might be a few weeks away, but it’s the Call of Duty: Vanguard beta this weekend.

In other Call of Duty news, the cat’s out of the bag as a leak reveals that the 2022 instalment will be a Modern Warfare sequel.

Did you miss our previous article…
https://www.hellofaread.com/technology/heres-how-not-to-ruin-your-new-nintendo-switch-oled-display/

Emmerdale spoilers: Rhona terrified as she discovers rapist Pierce Harris is out of prison...

Shane Richie warned to lay off AJ Pritchard on I’m a Celebrity by his...

Meghan Markle’s biography where she says ‘I’m proud to be a feminist’ is WIPED...