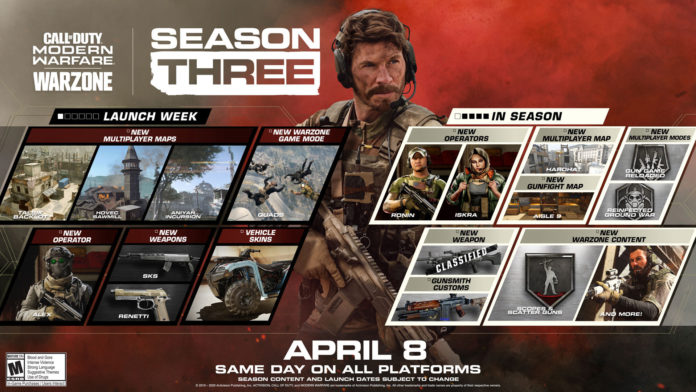 One is Talsik Backlot, which is a remastering of the classic Call of Duty 4 map. Call of Duty 4’s Backlot map has been remastered Later on in the season, we’ll be getting two more maps: Hardhat (Multiplayer) and Aisle 9 (Gunfight).

All player ranks at 56 or higher will be reset immediately, bringing them back down to 55.

So you’ll have to work your way back up to 155 again for season three. “As Ghost asks Captain Price for backup, a familiar face returns to fight the evil that has invaded Verdansk,” Activision revealed.

“Much like many new Operators who are just joining the biggest battle in Call of Duty history, he is regrouping with the Operators of Armistice to turn the tide of this ongoing conflict.

“That Operator is Alex, and he joins the ongoing battle in Verdansk in the latest update to Modern Warfare, including Warzone, in Season Three.”

We’re also expecting two more Operators later in season three.
One is named Ronin, and is described as “a saboteur and master of multiple fighting systems”.

And then there’s Iskra, a new Allegiance fighter in the Chimera division. You can now play Warzone in a four-person squad The most exciting Warzone update for many will be the introduction of Quads.

It means you can now play as part of a four-person squad, rather than being limited to a maximum of three.

You can play in teams of up to four in Battle Royale and Plunder modes.

Later on in the season, we’re expecting a Scopes and Scatter Guns modes – which limits you to using shotguns and sniper rifles.

And Activision has promised new weapons and blueprints in Supply Boxes and as ground loot too.

You can also customise vehicles using skins now. They apply as soon as you start driving them around.

In other news, Call of Duty recently banned 50,000 Warzone players for cheating.

We reveal the best places to land in Warzone.

What new features, modes or weapons would you like to see added to Modern Warfare? Let us know in the comments! Work and Pensions Secretary confirms £20 Universal Credit uplift will NOT be brought back...