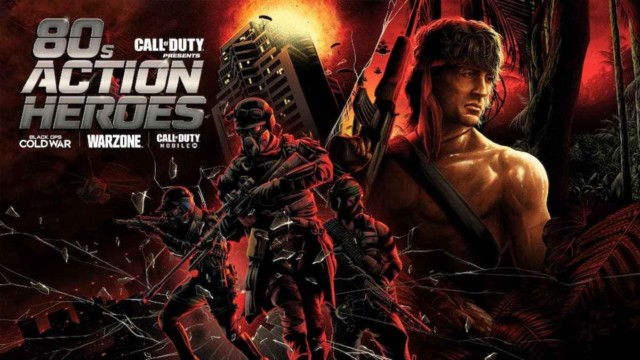 CALL of Duty is going retro with its next update with the introduction of two of the biggest action stars of the ’80s.

Rambo and Die Hard’s John McClane will both be making their way to Warzone, Black Ops Cold War and Call of Duty Mobile next week.

They’ll become the latest famous fictional figures to be transformed into Operator skins that players can purchase for their in-game characters.

The update will tie in with the arrival of Verdansk ’84, an ’80s-themed map recently introduced to hit battle royale game Warzone.

In it, action legend John Rambo – who has been played by Sylvester Stallone across five movies – appears to shoot down a soldier using his iconic bow.

That’s presumably when the skin will become available to purchase on the Call of Duty store.

On Thursday, Activision dropped an even bigger hint.

The US firm posted an image to Twitter featuring pictures of Rambo, as well as the skyscraper where 1988 action flick Die Hard is set.

The action begins May 20th. pic.twitter.com/8Rr3c7g26u

The image was captioned: “Some heroes Die Hard. Others draw First Blood. The action begins May 20.”

Those are references to the first Rambo, titled Rambo: First Blood, and (obviously) to the Die Hard franchise.

That would heavily hint that, as well as Rambo, players will have the chance to play as Die Hard lead character John McClane.

He’s been played by Bruce Willis across six movies.

Glass, who gives a sh*t about glass? pic.twitter.com/aiR1Xx2SKO

As if you needed more convincing, a third hint was dropped by the company on Friday.

A tweet from the official Call of Duty Mobile account read: “Glass, who gives a sh*t about glass?” A reference to a famous line from Die Hard.

Rambo and McClane are the latest in a wave of classic characters two make their way to Call of Duty.

Earlier this year, the Xenomorph from the Alien franchise got its own outfit, too.

Are you excited for the CoD update? Let us know in the comments!

Did you miss our previous article…
https://www.hellofaread.com/technology/gorgeous-black-and-red-ps5-dualsense-controllers-unveiled-by-sony-and-theyre-out-next-month/

Close to four million resentful renters locked out of buying a house due to...