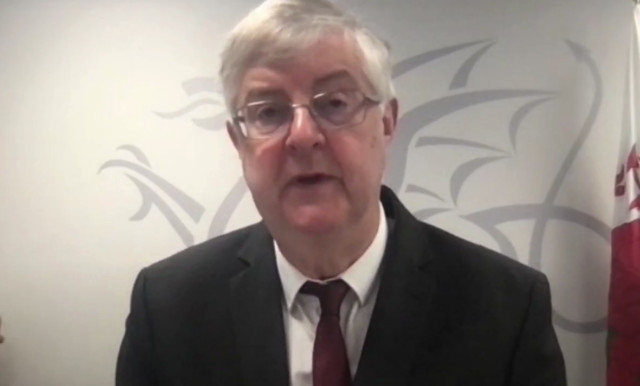 The First Minister revealed he’s shelved plans to allow small events to go ahead and let people hug loved-ones outside their bubble.

And he braced Wales for even more gloom by warning other freedoms could be kicked down the road if the infectious strain runs riot.

His note of caution turns the screw on the PM, who remains bullish about lifting England’s lockdown on time but has “ruled nothing out”.

The four nations of the UK have tackled the pandemic separately and are opening up at different speeds.

Throughout the crisis Mr Drakeford has taken a markedly different stance than Mr Johnson.

Like England, pubs and restaurants will open indoors in Wales on Monday, but Mr Drakeford has abandoned plans for a wider relaxation because of the spread of the Indian variant.

UK cases of the super-strain have doubled in just a week and experts warn it could be 60 per cent more infectious.

Mr Drakeford told Sky News this morning: “We had thought of moving ahead with the reopening of smaller events, we’ll pause that for a moment.”

Hugs have also been sacrificed to keep two-metre social distancing in place.

The First Minister told BBC Radio 5 Live: “Within your own household bubble or extended household you’ll be able to make decisions about who you hug.

“But we’re not yet thinking, largely because of the Indian variant, we’re not going to change the rules about people more generally. We expect the two-metre social distance to be sustained.”

The PM this week confirmed people in England would be allowed to hug close friends and family if they wished (Credit: Sky News)

He vowed to lift the draconian curbs as soon as scientists gave the green light – but would not hesitate to further delay if they sounded the alarm.

Pressed if he postpone freedoms on the advice of Sage, Mr Drakeford said: “Yes, we would.

“We tried our best to follow the scientific advice at every step and if the advice were to be that we should hold back on some further easements because the risks in doing so would be too great then certainly that is what we would do.”

The PM this week confirmed people in England would be allowed to hug close friends and family if they wished.

And he yesterday expressed optimism of ridding the country of lockdown on June 21.

But he “ruled nothing out” and hinted that targeted whack-a-mole lockdowns could return to stamp out local outbreaks.

Surge testing is already underway in variant hotspots such as Bolton.

Ministers are banking on Britain’s pacey jab rollout stopping the spread driving up hospitalisations and deaths.

“It’s more infectious but at the moment we have no evidence that it’s more severe in terms of its impact on the human body or on hospitalisation.

“And there’s no evidence the vaccines don’t work against it. That’s the good news.”

Did you miss our previous article…
https://www.hellofaread.com/politics/why-do-mps-use-weird-phrases-like-my-right-honourable-friend/

I’m A Celebrity castle had secret heating lamps you didn’t see on TV –...

Watch moment Corrie’s Simon Gregson is thrown out of bar after stripping to waist...