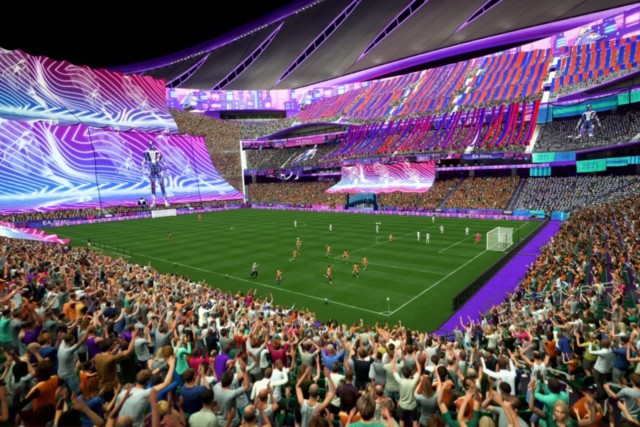 DIVISION rivals has had an overhaul this year, with the introduction of a new ladder system.

Rise up the ranks in FIFA 22 to earn weekly rewards, and progress to the Elite Division.

But you’re going to need to swot up on what’s new this year, as there are a number of updates compared to FIFA 21 FUT Champions.

What is FIFA 22 Division Rivals?

Division Rivals is the most popular mode in FIFA Ultimate Team (FUT) and it’s had an overhaul for FIFA 22.

It’s now a seasonal competition running six weeks. Everyone starts out in Division 10. Placement Matches have been scrapped, along with the placement route through Squad Battles.

The new ladder system has introduced Ranks, Stages, and Checkpoints, and are described by EA below:

If you win a match, you progress to the next Stage. If you lose, you move back one Stage – unless you’re at a Checkpoint. If you draw a match, you stay where you’re at and don’t move forwards or back.

The benefit of winning consecutive matches is that you’ll kick off a win streak, denoted by a jazzy little flame icon after your first two victories in a row.

For every consecutive win in a streak, you’ll move forward by an additional Stage. Break your streak, and lose that perk.

At the end of the Season, your progress will reset to a lower Division.

This is decided based on which Division you finished the previous Season.

Elite Division is a brand new tier that exists beyond Division 1 for the best FIFA 22 FUT players to go head-to-head.

The progression system will be familiar to FIFA 21 players, as it uses a Skill Rating system.

Players are ranked based on their Skill Rating and the top 200 are displayed on the Global Leaderboard.

Once you break into the Elite Division, you’ll stay there for the remainder of the Season.

Matchmaking is handled a bit differently in the Elite Division, given it’s the cream of the crop competing.

It’s based on Skill Rating and players’ physical location, and will only match with other Elite players.

To earn your weekly rewards, you need to win a set number of matches before the end of each week.

Your reward is based on the Rank you’re in, so the higher the Rank, the better the rewards.

You can also win more matches in the week to upgrade your Weekly Rewards.

If you’re eager to earn additional rewards, you’re in luck with the new Seasonal Milestones.

Play Rivals matches (regardless of the outcome) to work your way towards Seasonal Rewards.

Milestone Rewards are capped at three per Division, based on the Division you finish in.

What time do Division Rivals rewards come out?

Now that you know what Division Rivals is and how the rewards work, the next question is what time do you get them?

FIFA 22 Division Rivals Weekly Rewards come out every Thursday at 8am UTC which translates to:

So get any additional matches wrapped up by Wednesday night and enjoy the fruits of your labour when you wake up on Thursday morning.

What is FIFA 22 FUT Champions?

FIFA 22 FUT Champions has also had a little revamp from last year, and is using a points-based system. So the good news is that even if you’re losing, you’re still making progress.

Champions Play-Offs and Finals have also been introduced, and the competition is being spread over the week.

You’ll earn Champions Qualification Points in Division Rivals, and be entered into the Play-Offs once you have enough.

The Champions Play-Offs are the first leg of FUT Champions competition. It’s open for the entire Season which is around six weeks long.

There’s no time constraints other than that, so you can work your way through a limited number of games as and when you’re ready.

You’ll earn points as you go towards Champions Ranks and Rewards, which are rewarded at the end of your Champions Play-Offs run.

If you don’t earn enough points, you won’t make it to the Finals, but you can re-qualify for the Play-Offs by diving back into Rivals.

If you earn enough points, you’ll unlock a Finals Qualification Token which – you guessed it – lets you access the Champions Finals.

The FIFA 22 Champions Finals take place over the weekend, while the Finals Qualification Token lets you enter the fray at a time that’s convenient for you.

This year, the rewards have been rebalanced across Play-Offs and Finals, while the overall match requirements have been lowered.

In the Play-Offs, you’re competing for the chance to qualify for the Finals, as well as the first lot of rewards. The incentive to qualify is the prospect of even better rewards.

If you make it into the finals, your rewards are decided based on where you finish.

If you finish all of your Finals matches, you can claim your rewards immediately.

If you have outstanding matches, you’ll get your rewards at the end of the competition.

What time do FUT Champions rewards come out?

FIFA 22 FUT Champions rewards come out every Monday at 9am UTC which is:

Check out these FIFA 22 deals to save on the brand new title.

This bundle gets you FIFA 22 and a brand new Xbox Series S.

Meanwhile Xbox players can look forward to the Halo Infinite beta this weekend.

Question Time: Under 30s special When is it on TV and which politicians...

Love Island fans desperate for ‘snake’ Cassidy to be dumped as she and Mac...

North East lockdown rules explained: Everything you can and can’t do as rules tightened...