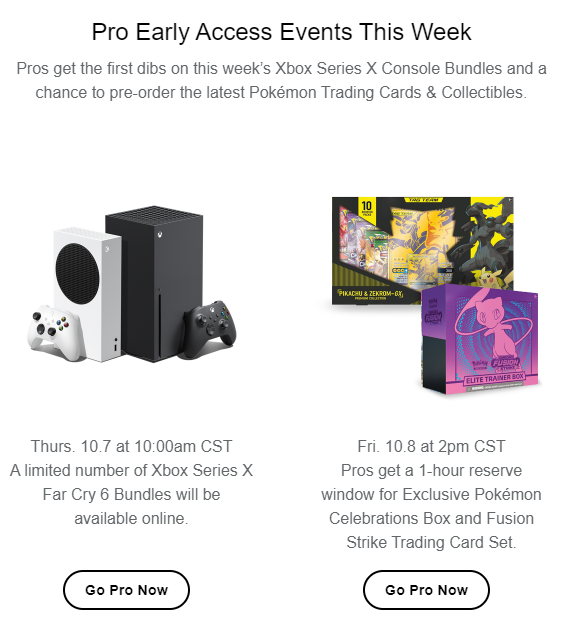 GAMESTOP is about to drop an Xbox Series X restock which sees the console bundled with Far Cry 6.

The retailer is prepping to release the bundles online this Thursday, October 7, at 8am PST / 10am CST / 11am EST but there’s a catch.

While members won’t be able to access the drop at an earlier time, they will get first dibs.

The window of time for first access is usually around an hour, with general access becoming available after that.

Obviously if all of the stock has been sold by then, shoppers will be out of luck.

There’s a number of perks available, but the early access to console drops is undoubtedly what’s luring in most customers.

If you don’t feel like ponying up the extra cash to become a member, visit the website on Thursday and keep your fingers crossed.

On the plus side, the price of the bundles can put people off, so they may not necessarily sell out as fast as standalone consoles.

In the email GameStop sent out to members (via Wario64), it says there’s a limited number of Xbox Series X Far Cry 6 bundles available.

It hasn’t detailed what else – if anything – is included besides the game, but we may see an extra controller tossed in.

The image in the email also shows an Xbox Series S, but it’s not clear if this means the digital-only console is also getting bundled with Far Cry 6.

I’d recommend signing up for Pro access if you’re still on the hunt for a PS5 or Xbox Series X.

It’s only $15 for the year, giving you first access to console drops in the runup to Black Friday and Christmas.

If you’re all set for next-gen consoles, you should check out these Black Friday Oculus Quest 2 Deals.

Meanwhile, we’ve got the Battle 2042 beta to look forward to this week.

And if you’ve picked up FIFA 22, be sure to check out our Ones to Watch guide, as well as our FUT Champion and Division Rivals Rewards guide.

Did you miss our previous article…
https://www.hellofaread.com/technology/liverpool-aces-fume-at-fifa-22-ratings-as-virgil-van-dijk-threatens-to-start-a-petition-and-gomez-slams-shambles/

Britain’s scientific experts meet today to review how lockdown has worked – and extend...

Olivia Attwood fans all have the same complaint as she screams doing Bushtucker...