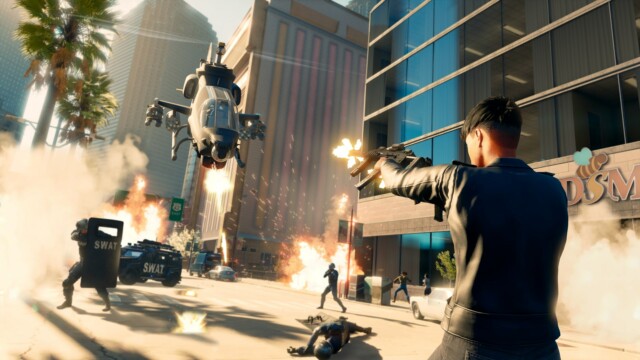 SAINTS Row is back, but is the open-world crime sim a GTA-beater? Your answer likely depends on why you play these games.

If you’re a fan of where Rockstar Games has taken the GTA series recently, Saints Row probably isn’t for you.

The new Saints Row will be no GTA 5 for sure.

Jack a car here and there’s no meticulous car jacking animation – you simply double foot it through the windscreen and kick the driver out. When you exit a car, you almost eject.

Everything is built to keep the momentum going. Even missions that task you with stealing cars automatically mark the vehicle’s location on your map.

The game is based in Santo Ileso, a fictional city in the American Southwest. It’s got arid deserts, winding motorways, and downtown cityscapes.

Its world isn’t as impressive as the ones seen in GTA 5 and Red Dead Redemption 2, but it seems like a marked improvement on past Saints Row games.

But it’s not trying to be a real, living place. It’s a sandbox.

You won’t mistake the non-player characters for real people with real lives, as you sometimes do with GTA 5.

The citizens of Santo Ileso are punchbags, ragdolls, and background props. The cars are there to be stolen and destroyed.

This is a theme park of an open-world game. It doesn’t feel designed for you to slow down and take it all in.

As such, when you get into a gunfight, there’s no taking cover.

Running and gunning are the order of the day, along with brutal takedowns and special moves – one such move lets you stuff a grenade into someone’s trousers before tossing them into their pals.

Land a headshot with a shotgun and the enemy violently ragdolls through the air. You won’t find GTA’s complex physics systems here, but you will still find yourself laughing at how far you sent someone with a shotgun blast.

Get into a car chase and you can flip out of the window and lay on the roof, firing bullets from prone before hopping between vehicles.

You also have access to a wingsuit later on, which allows you to soar over the city. But the developer says this won’t make vehicles obsolete.

“That was definitely a conversation that we had multiple times: how do we make wingsuit marry with the rest of traversal?” principal designer Damien Allen explains.

“You can get higher up on buildings, you can land on a vehicle that someone else is driving, wait till they get up to speed and then keep going.

“As you unlock the abilities, you can take down enemies, you can bounce off the heads of pedestrians and enemies, and continue your traversal throughout the city. We wanted to have it be a little bit more skill-based.”

Take the wingsuit into two-player co-op and the options are endless. One minute you might be riding shotgun while your friend drives, and the next you’re on the car roof and wingsuiting down the street.

Where it really does feel like old-school GTA is in the game’s structure.

After a short opening section, you’re tasked with establishing the Saints as a new street gang. It’s a proper rags to riches story, where you slowly grow your influence across the map.

Not only do you take on missions and advance the story, but you also purchase businesses that act as fronts for your illicit dealings.

You choose what businesses to build and where they go, from insurance fraud companies to toxic waste dumps and ice cream trucks that control the drug trade. Each one adds new side missions to the map.

There’s plenty of character customisation, too.

From bling to tattoos, you’re free to clothe and customise your boss as much as you like. There are even six voice actors to choose from to represent them in-game.

When you’re done with that, why not trick out one of your cars?

Over the course of the game, you’ll fill your base – a derelict church – with allies and items while taking control of territory from the three main gangs: the Marshalls, the Los Panteros, and the Idols.

The Marshalls are a private military company with high-tech gadgets, the Los Panteros are muscle-bound and drive muscle cars, and the Idols are a group dedicated to cyberpunk headwear and creating a post-capitalist society.

Every group has its own behaviours and enemy types.

Saints Row is shaping up to be a fun open-world romp when it comes out on August 23.

It might not be a GTA-beater, but it could definitely tide us over until GTA 6.

Written by Kirk McKeand on behalf of GLHF.

Did you miss our previous article…
https://hellofaread.com/technology/fortnite-challenges-chapter-3-season-3-week-7-how-to-stop-the-music-at-rave-cave/

I’m A Celebrity should move to SUMMER and extend series to show lost tasks,...

Who was George Brooksbank?