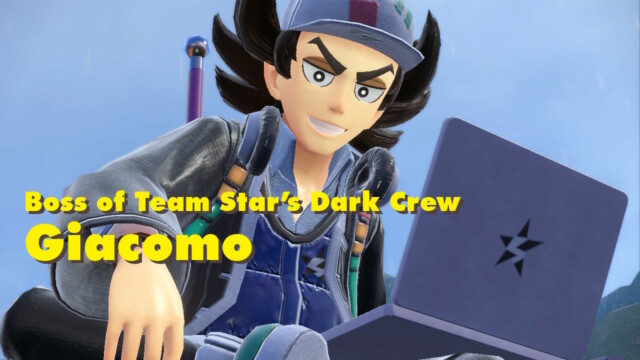 IN Pokémon Scarlet and Violet there are five Team Star bases you have to take on in order to complete the game.

These are separate from the world’s eight gym leaders, and you have to find and defeat each one if you want to finish the story.

Giacomo should be your first stop.

However, as Pokémon is now open world, it’s hard to tell which base you should take on first.

Don’t worry, we’ve done the research for you, so you know how to take down Team Star in Pokémon Scarlet and Violet.

While Mela was shown in the promos, she’s not the easiest Team Star boss to take on.

We recommend Giacomo, who has a squad of Dark-type Pokémon.

Dark is weak to both Fighting- and Bug-type, and this latter type is available in abundance in the early game.

His team has Dark-, Ghost-, and Psychic-type moves, so try to bring in three Pokémon that resist these types.

Mela’s challenge is also very straightforward, but her team is a little bit higher in level than Giacomo’s.

Fire-types are weak to Rock-, Ground-, and Water-types, and you should have a few of these you can use at this point.

Sprigatito starters might struggle, but you can pick up Finizen or Klawf early in the game to help out.

This one can be a tricky fight, although clearing out the base isn’t too difficult as long as you remember that you can heal your Pokémon up at vending machines.

Whenever the Starmobile is hit, it will throw our Poison Spikes, which can inflict Toxic onto your Pokémon when they switch.

Steel- or Poison-type Pokémon are immune to this, so try to have at least one (if not three) of these on your team.

This is another one where Sprigatito starters might find it difficult.

Due to the typing of this base, Poison- and Steel-types are again your best bets.

The battle itself isn’t too difficult, and if you have some Pokémon on your team that have Poison-type moves, like Dunsparce, then it should be a breeze.

He also leads a dual Water-type, so Electric- or Grass-type moves will also come in handy.

Eri is one of the most difficult challenges in the game, though Fighting is weak to a number of common types, including, Psychic, Fairy, and Flying.

Half of her team are dual types that are weak to Ground, so it might be a good idea to have some of these, too.

Fuecoco has a very tanky final form, which can be great when combined with its powerful signature move.

Written by Oliver Brandt and Georgina Young on behalf of GLHF.

Did you miss our previous article…
https://hellofaread.com/technology/pokmon-gos-mystery-event-will-let-you-catch-all-seven-ultra-beasts/

How Coronation Street newcomer Kimberly Hart-Simpson went from McDonald’s boss at 16 to soap...