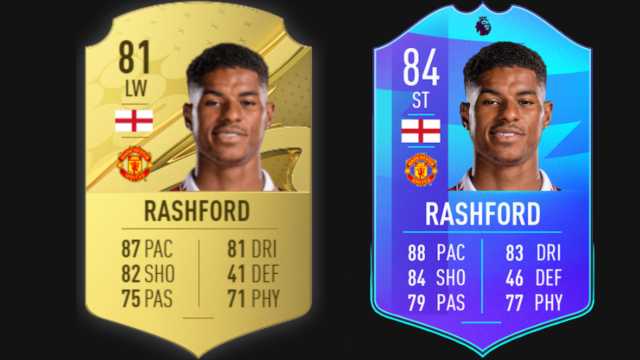 DESPITE facing off against five of the Premier League’s best midfielders, a striker has once again taken this month’s Player of the Month.

EA Sports has announced that Marcus Rashford is September’s Player of the Month for FIFA 23, beating out top-rated player Kevin De Bruyne.

While Player of the Month is decided entirely via fan vote, Rashford had a great September and is well-deserving of the title.

His Arsenal game was one of his strongest matches to date, not only scoring two of the three goals but assisting in the last.

Rashford has also proven himself to be a man of the people, taking the government to task over free school meals.

Originally, Rashford had an overall rating of 82, which was downgraded to 81 this month.

This makes the Player of the Month card even stronger with a three-point boost.

Here are Rashford’s base stats compared to his Player of the Month card:

Rashford’s new Player of the Month card is available in FIFA Ultimate Team (FUT) packs from now until the end of the month.

After this they will only be available for an inflated price on the in-game Transfer Market.