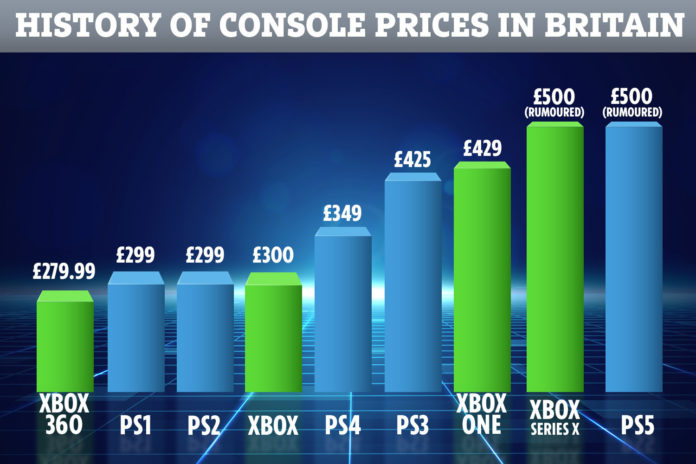 THE hotly-anticipated new Xbox and PlayStation consoles will cost up to 500 when they launch later this year, according to experts.

A duo of reports warn that the Xbox Series X and PS5, both scheduled for release before Christmas, will carry record-breaking prices to offset the huge costs of making the high-powered machines.

One of the reports, from Bloomberg, reveals that Sony is struggling to keep the price tag of its next-gen console down due to a scarcity of parts.

Insiders at the company, who were not named by Bloomberg, told the publication that each console is costing Sony up to US$450 (345) to manufacture.

This will push the price consumers pay up to $500 if Sony hopes to turn a profit, according to experts.

It’s likely the Japanese gaming titan will mirror this price for the UK market, meaning gamers will shell out around 500 for the console.

“Build cost is not the retail price”, industry analyst Daniel Ahmad, ofNiko Partners, tweeted in response to the Bloomberg piece.

“As the article states, a $450 build cost would probably result in a retail price close to $500.”

A 500 price tag would make the console the priciest PlayStation to date, jumping well above the 349 asking price of the PlayStation 4.

Microsoft unveiled the Xbox Series X in December. It’s out later this year

That’s because Microsoft and Sony will likely try to match one another’s price tags at launch.

“Both consoles will be a lot more similar to each other in terms of specs, pricing and features when compared to the last generation”, said Katan Games analyst Serkan Toto.

“I also expect no handheld versions, a PSVR 2, and only a single device (instead of a PS5 standard and Pro, for example) for both companies at launch.”

Again, Microsoft would likely mirror this price in the UK, putting it at around 500. That would make it Microsoft’s most expensive console to date, leapfrogging the 429 Xbox One.

Sony’s struggle to keep manufacturing costs down is the result of a higher-than-usual demand for parts, according to Bloomberg.

Smartphone makers are beginning to manufacture the next wave of 5G mobiles, which require a reliable supply of DRAM and NAND flash memory the same tech used by games consoles.

With so many companies vying for similar parts largely focused at factories in China prices have skyrocketed.

The decision to raise the PS5’s asking price is a tough one for Sony, as gamers are sure to balk at the jump in cost from the PS4, experts told Bloomberg.

“Consumers will benchmark their expectations based on the PS4 Pro and PS4,” Macquarie Capital analyst, Damian Thong, said.

“If Sony prices above that, it would likely be to balance a need to offset higher materials cost, against risk to demand.”

The new console will apparently run games at 4K resolution – double that of HD – with the possibility of running 8K.

It will also process games faster so as to “eliminate” loading times. A new Halo game will launch with the console.

Sony got in a bit before Microsoft, revealing details of its PS5 console in October, 2019.

In other news, Sony is expected to finally show us what the PS5 looks like at a press event later this month.

Read our round-up of the latest rumours about theXbox Series X and PS5.

And find out why both of these consolescould be the last you ever own.

Love Island fans in shock as Naz and Eva and Rebecca and Jordan ALL...