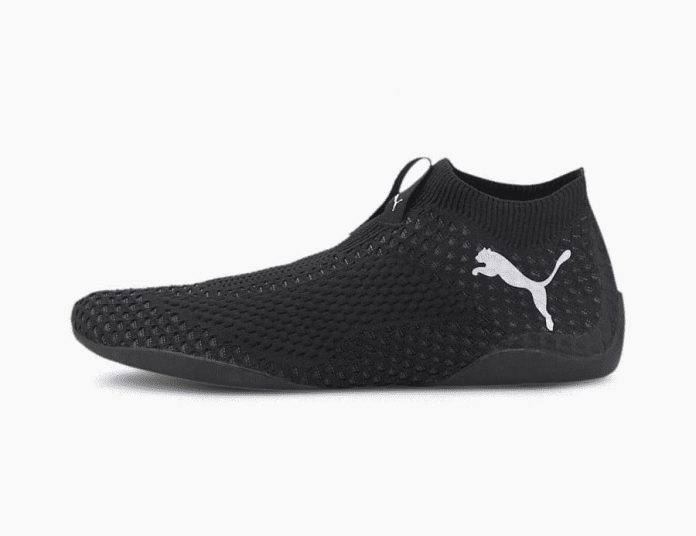 THEY’RE one of the world’s biggest sportswear brands, sponsoring dozens of the planet’s top athletes.

But in a bizarre move, Puma is pushing fans to their sofas by releasing an 80 pair of shoes designed to be worn while playing video games.

The company’s “active gaming footwear” look like Sci-Fi ankle socks and are designed to be comfortable and “grippy”.

They’re apparently the perfect tool for professional video gamers, also known as esports athletes, who Puma says it held “extensive talks” with while designing the footwear.

From the website, it’s not clear what these mean, but Matt Shaw, team head of digital marketing and gaming for Puma, revealed more on Twitter.

The shoes will set you back a knee-wobbling 80

“The word active is used to describe how the product supports players as they transition between positions during gameplay,” he wrote.

“You can imagine people leaning forward in their seats with their elbows on their knees (SEEK/ATTACK), or people reclining backwards with their controllers in their laps (CRUISE/DEFEND).

“There are a bunch of variations on these positions, all of which we designed for.”

However, Smith admitted the shoes were unlikely to improve a gamer’s performance.

Here’s the box they come in

“AGF was designed to fit the exacting needs of elite esports athletes, who had very specific feedback about the footwear they wear (or don’t) during training and competition,” he said.

“Will it help you perform better? Probably not drastically.

“But it was designed to make top-tier esports athletes more comfortable when they are performing, so we think you’ll enjoy wearing them!”

The Active Gaming Footwear is available to buy now in the UK and US on Puma’s website.

The shoes are unlikely to improve a gamer’s performance

They’re apparently designed to be used both at home and “in-arena” the large venues packed with thousands of fans where esports athletes play tournaments.

Smith has previously suggested the line between sports and esports athletes is increasingly blurred.

“Obviously, Pumas heritage is as a sports brand,” he said earlier this year.

“But its patently obvious to us that our consumer makes very little distinction between athletes in stick-and-ball sports and esports athletes.”

In other news, Nike recently sponsored 16 esports teams in a bid to create the “LA Lakers of video gaming”.

Team who play Overwatch now have their “jerseys” sold in sports gear stores alongside England and Brazil’s football strips.

And, here’s how the intense world of e-sports breaks teenage gaming stars.

What do you think of Puma’s new kicks? Let us know in the comments!

Smitten Love Island finalists cant keep their hands off each other as they finally...