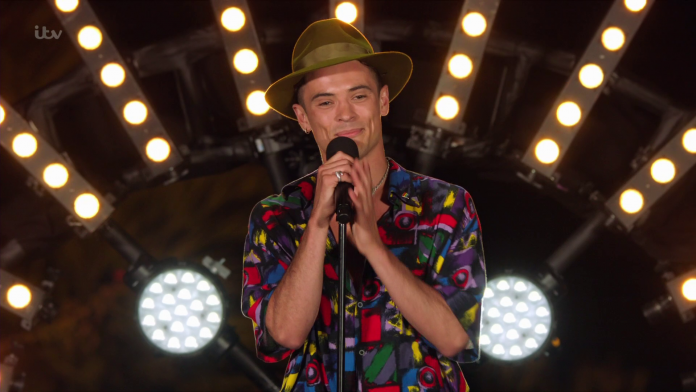 The actor, who played tragic Paul Coker in the hit BBC soap, took to the stage with David after auditioning for the judges.

Jonny joined EastEnders in 2015 and Paul was Ben Mitchell’s first proper love – with viewers were obsessed with their relationship.

Labey was left star-struck as Foster joined him on the stage and the pair performed a version of Michael Bubl’s Feeling Good with David on piano.

Fans at home couldn’t get over how good Jonny’s performance was, taking to Twitter to make their feelings known.

One wrote: “Wow! David and Jonny singing together – thatll help him out!”

Another said: “Oh my god, that was sensational!”

During the show, Jonny also made a dig at EastEnders after being “brought back from the dead” for the ITV singing competition.

Opening up about his shock departure from Walford, he said: “A new producer came on and he made some bold decisions.

“Often when a new producer comes on they try to change things around, and unfortunately I was a part of that decision.”

The curly-haired hunk continued to The Daily Star: “To millions of EastEnders fans I am dead.

“Now they are digging me back up again. X Factor is the biggest show on TV so I jumped on board.

“Its being pinned as a life changing opportunity. This is such an incredible platform.”

Despite being axed three years ago, Paul still remains a huge part of EastEnders today and fans were heartbroken earlier this year when Ben revealed that he is still grieving for his late love.

He went on to be a judge on CBBCs biggest show Taking The Next Step alongside Marlon Swoosh and Kimberly Wyatt, and has also starred in the West End.

A Level results: Teachers’ uproar as 40% of grades pulled down ‘unfairly’

Face mask chaos as confusing advice from ministers is blasted

Coronavirus chaos as Government doesnt know how many British nationals are stranded in ground...