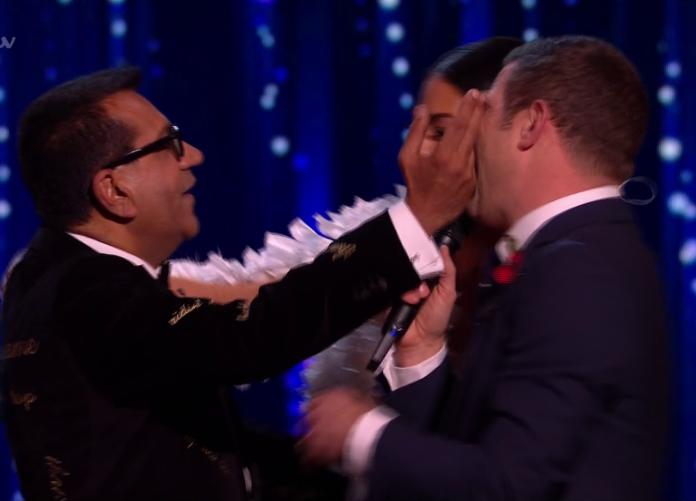 The 56-year-old journalist was booted from the competition after receiving the fewest public votes.

He was in the bottom three alongside No Love Lost and V5, with the trio waiting to hear who would be sent home without taking part in the sing-off.

Dermot broke the news, announcing: “The act with the fewest votes and leaving the competition immediately is Martin.”

After a brief chat with the presenter, Martin turned to embrace his mentor, Nicole Scherzinger, who had rushed onto the stage to show her support.

As he reached to hug the beauty, he smacked Dermot right in the face, with the professional presenter brushing the incident off as he moved the show along.

While everybody on stage expertly ignored the awkward faux pas, viewers at home were less forgiving as they flocked to social media to laugh at the mishap.

One wrote: “Lol @ Martin whacking Dermot in the face”.

Another tweeted: “DID HE JUST ACCIDENTALLY HIT DERMOT IN THE FACE????”

Martin courted controversy throughout his time on the celebrity spin-off of Simon Cowell’s show.

Fans were outraged following the first live show when Simon voted to send home Love Actually’s Olivia Olson over Martin when they were both in the bottom two.

There was further fury last weekend when Simon broke his own rule by sending the vote to deadlock – refusing to eliminate Martin even though he’d forgotten his words during his performance.

Ex EastEnders star Jonny Labey was booted from the competition instead, with the actor appearing shocked when Dermot announced the result of the public vote.

In addition to Martin, former islanders No Love Lost were sent home last night after losing the sing-off against girl group V5.

Both Nicole and Louis Walsh chose to save V5, with Simon shocking when he announced that he will bring back one eliminated act as a Wildcard later in the series.

Royal Christmas faces being scrapped as ‘rule of six’ stops the Queen from enjoying...

Emmerdale’s Natalie Anderson looks incredible as she strips to bikini