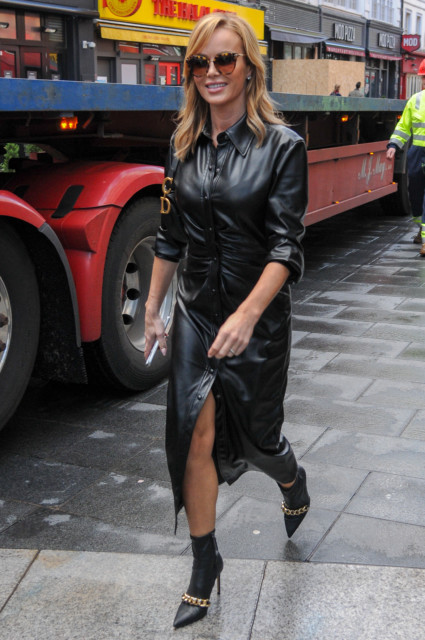 AMANDA Holden showcased her sensational figure in a daring leather dress as she strutted across London’s Leicester Square today.

The 49-year-old put on a stylish appearance in the collared shirt dress, which featured ruching detailing around the stomach, as she left Global studios following her Heart breakfast show.

The Britain’s Got Talent judge’s stylish number featured a front slit that highlighted her lean legs and complementing ankle boots.

Amanda rounded off her look with a Dior saddle handbag and sleek shades while her blonde locks fell to her shoulders in a sleek style.

Over the weekend, Amanda bewitched her fans with a spellbinding Halloween makeover.

The TV star wore a jet black wig and a pointy purple hat as she became a witch to make some spooky treats with daughter Hollie eight. Her collared shirt dress featured ruching around the stomach

Holding up a ghostly doughnut, Amanda showed off her pearly white teeth as she leaned over her kitchen worktop.

She asked: “What are your plans for Halloween?

I’m looking for some outfit inspiration! Let’s make the best of it

Elsewhere, HOAR revealed last week that Amanda and her BGT co-star Alesha Dixon have won their battle to get bumper equal pay rises — after the show’s boss Simon Cowell backed their cash fight.

The salaries of the two women will be subject to an internal review after we revealed they earn less than half that of David Walliams. Amanda underwent a spellbinding makeover over the weekend. Pictured with her daughter Hollie She recently negotiated a pay rise for her BGT work

Cowell, 61, gets more than £2.5million but he devised the format, and owns the rights to the hit franchise around the world.

And tonight it was revealed that he was shocked when he discovered the gap in his fellow judges’ wages.

A source said: “Alesha was rightly upset when she read the pay discrepancies in black and white. The story also ruffled feathers behind the scenes. Simon realised this apparent sexism wasn’t a good look. He’s demanded something be done, and the matter is being reviewed.

“Although Simon isn’t responsible for pay deals, he obviously has great sway and he has asked that the matter be investigated internally so that this sort of situation doesn’t arise again.”

Speaking recently, Amanda said: “I do feel Alesha and I should be paid the same as Simon Cowell and David Walliams. Because why is their value higher than ours? I don’t understand it.”

Talent contracts for the show are negotiated by ITV, production company Thames and the artist’s agent.

Did you miss our previous article…
https://www.hellofaread.com/britains-got-talent/im-a-celebrity-hosts-ant-and-dec-finally-face-bushtucker-trial-after-years-of-laughing-at-contestants/

Queen may never return to royal duties as she won’t be safe in public...

EastEnders viewers in tears as Jean Slater reveals she is dying of cancer as...