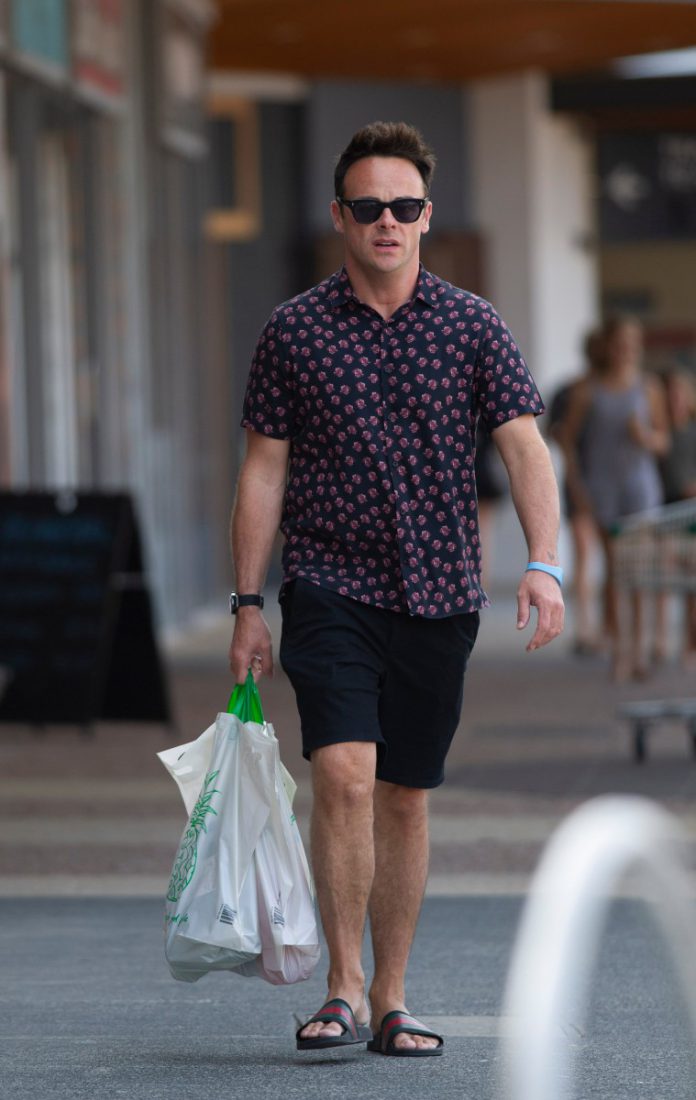 ANT McPartlin has been spotted heading to the shops for groceries on a break from I’m A Celebrity.

The presenter, 44, has made a comeback on the jungle show after the public gave him a second chance following his drink drive arrest last year.

Having quit booze and prescription drugs, Ant looked fresh-faced and trim as he walked along the street wearing his Gucci sliders.

Though his girlfriend and sober coach Anne-Marie Corbett travelled to Australia to keep him company, she was nowhere to be seen on his trip to the shops.

Ant bared his legs in shorts and wore a patterned shirt, that revealed a glimpse of his wrist tattoo.

Though Ant looked relaxed, no doubt his looming divorce woes weighed heavy on his mind.

Last week HOAR revealed talks had broken down between Ant and his ex-wife Lisa Armstrong over a gagging order.

It is now increasingly likely their dispute could end up in a public mud-slinging showdown at the High Court in London somethingAntis desperate to avoid.

Lisa is refusing to sign thenon-disclosure agreement(NDA) and Ant will not agree to a financial settlement until she does.

Ants legal team wants to avoid going to court, which could mean excruciating details of the couples 12-year marriage being made public.

After hisdrink-drive crashin March last year,time in rehabfor addiction to painkillers and relationship with hisformer PA Anne-Marie who Lisa considered a friend Ant has rebuilt his image and been given a second chance by the public.

In order to protect his reputation from further damage, he is asking Lisa, 43, to sign a NDA and will not agree to a financial settlement until she does.

But Lisa is refusing to sign the so-called gagging order.

A source close to the couple told HOAR: Lisa is an honest, loyal and decent human being. She isnt interested in how much money she gets.

She told her dad Derek on his death bed earlier this year that she would stand strong and shes not about to go back on her word.

She wont sign an NDA. As far as shes concerned, he is welcome to his money.

Ant has returned to his post alongside Declan Donnelly on I’m A Celebrity… Get Me Out Of Here!

Its not about that for her. Shes appalled at the way she has been treated ever since they split up, by people she loved, trusted and called friends.

He is sending her regular lawyers letters. The legal bill for this divorce is easily past the 1.5million mark.

But Ant is underestimating her. Shes not scared any more. She is more determined than ever not to fold and to get whats hers. She only ever wanted it to be fair.”

Thousands of homeowners to pay £880 extra on mortgage bills as interest rates set...