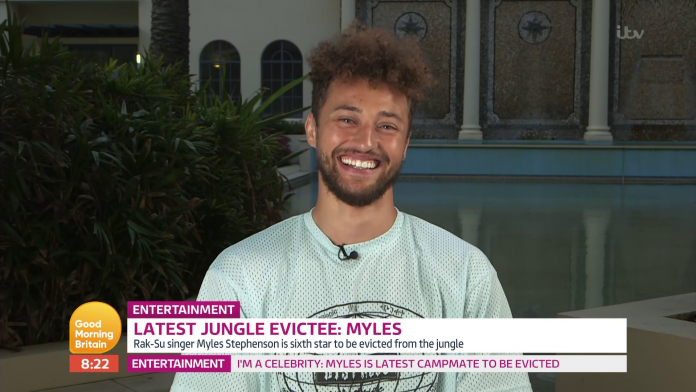 I’M A Celebrity’s Myles Stephenson admitted he finds Kate Garraway “so hot” but said her husband Derek has “nothing to worry about.”

The Rak-Su singer flirted up a storm with Kate, 52, on the ITV series and appeared on Good Morning Britain today to explain himself after his exit.

Hunky Myles, who hails from Watford, spoke from Australia’s Gold Coast to Kate’s colleagues Ben Shephard and Charlotte Hawkins and said why he found the presenter so attractive.

He revealed: “It was just Kate, she is honestly beautiful, she’s funny, she’s just really hot.

“I mean honestly her personality is amazing and I just clicked with her.

“Derek, I literally saw about 15 minutes ago and yeah we had a nice conversation. But he’s got nothing to worry about. he’s much better looking than me!”

He said: “Wow I would like to say I would love every single one of them to win, I honestly couldn’t pick.

Myles failed to address Jacqueline Jossa’s heartache, after reading out her letter from husband Dan Osborne in the jungle.

The ex-EastEnders actress has been rocked by more claims he cheated on her with Myle’s ex Gabby Allen.

Despite Myles having the hots for Kate, his I’m A Celebrity campmates have been playing cupid and want him to get together with Nadine Coyle.

The chemistry between the two popstars was bought to light in as they took part in the Dingo Dollar challenge – and former campmates Adele Roberts, 40 and James Haskell, 34 have added more fuel to the fire.

Adele said after he jungle exit: “I was trying to get them together from the start… So maybe it’s blossoming now.”

And James also said: “To see them paired up, what a good looking pairing.”

Despite their six year age gap, their electric chemistry fuelled the idea that there could be a potential romance on the cards – and even fans think that the pair would make a “cute couple.”

Nadine’s sister Charmaine Coyle appeared on Lorraine and was asked if anything would ever happen between them.

She didn’t give much away as she said: “I think its just pals but you never know. Well see what happens when they come out, well see.”

Are you allowed dogs at polling stations during the General Election 2019?

Jacqueline Jossa cant wait to get into bed with husband Dan as she feels...